A Novel of Hollywood Noir

By Jerry Ludwig
$19.99
Be the first to review this product 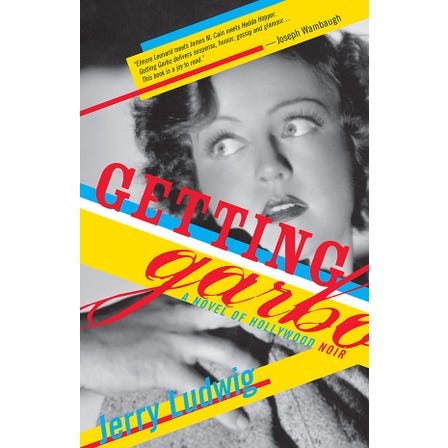 Set in the glamorous, cruel and often bizarre Hollywood era of the 1950s, Getting Garbo is a hilarious and suspenseful novel of the cinema’s Golden Age, when autograph hounds were relentless as they sought the names of stars who became legends in their own lifetime.

Nineteen-year-old Reva Hess is a charming autograph collector and the number one fan of Roy Darnell, star of the hit TV series Jack Havoc. Reva follows him everywhere, while keeping tabs on the private lives of film celebrities with her group of expert autograph collectors called The Secret Six.

Soon, the slight confusion between Roy’s own personality and the dashingly dangerous Jack Havoc becomes an ominous obsession and the novel turns to murder. Along the way, Jerry Ludwig brings the old Hollywood to life, evoking the giant screen figures of Humphrey Bogart, Burt Lancaster, Grace Kelly, Frank Sinatra and dozens more, as well as the off-screen ruthlessness of Jack Warner. This is a world where “getting Garbo,” the elusive Greta who never signs autographs, is synonymous with the yearning for the impossible, the longing for fame and romance and the blurring of fiction and reality.
Product Details

Jerry Ludwig is an accomplished Hollywood writer. His most recent credits include writing and producing Dash and Lilly, the TV movie on A&E. Ludwig won the Writers Guild of America award for Best Teleplay, and the picture was nominated for nine TV Academy Emmy's, as well as the Humanitas Prize, Golden Globes, and Producers Guild of America.
Reviews
Write Your Own Review
VIEW
9781402202230
All content and design copyright © Sourcebooks, LLC 2021. All Rights Reserved.