A Novel of Betrayal 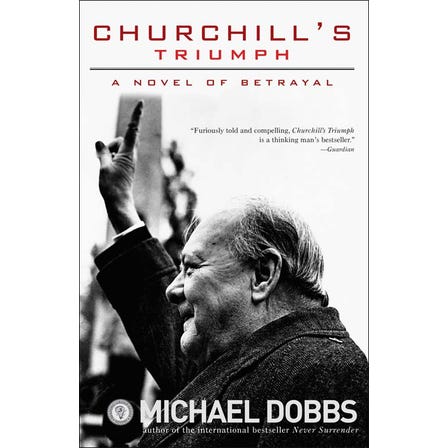 From Michael Dobbs, author of the book that inspired the smash hit Netflix series House of Cards, Churchill’s Triumph transports us to the end of WWII as the three most powerful men on earth—Winston Churchill, Franklin D. Roosevelt, and Joseph Stalin—gather in what will later become known as the Yalta Conference to discuss the possibility of worldwide peace. Despite their shared goals, these supposed allies will lie, cheat, and deceive each other in order to secure their respective places in history.

Dobbs takes you behind the scenes and brings you into the minds and hearts of the big three leaders: the dominating and seemingly all-powerful Joseph Stalin, with the largest army, and the mission of expanding the Soviet Empire; an ailing and fragile Roosevelt, willing to make whatever compromises he felt he had to in order to bring Stalin and Russia into the final campaign against Japan; and Churchill, the least powerful of the three, but the most far-sighted, who could not count on Roosevelt as his ally, and could not tame the avaricious Russian bear, determined to gobble up the nations around and beyond it. Like a fly on the wall of history, the reader becomes a hidden witness to these monumental negotiations, witnessing negotiations that would betray the heroic struggle of millions who died and fought in the Great War.

Acclaimed author Michael Dobbs allows the reader to eavesdrop on the world’s most powerful men at a crucial point in modern history.

Praise for Churchill’s Triumph by Michael Dobbs, bestselling author of House of Cards, the book that inspired the Netflix series:

“His portrait of Churchill is as masterly as ever: a wonderful compound of bluster, sentimentality, grumpiness and indefatigable physical energy. There are the usual elegant metaphors... In the tragedy of Poland burning while statesmen fiddled, Dobbs has found a theme worthy of his powers.”—Sunday Telegraph

“How do you delight the profit-maximising big retailers while at the same time writing something dark and moving? Michael Dobbs knows how...Dobbs knows his sources, but the dialogue is his own: good, clean, moving briskly and underpinned by the record, it conveys historical truth. As for Poland, it suffered all the horrors. Dobbs writes about the country with tight passion, transferring to his fictional village, Piorun, the rape, murder and savage enforcement by Germans and Russians which, so far away and so little regarded, actually happened. The old women weeping, the houses burned down, the bodies left promiscuously on the street are history set out for the attention of novel-readers, memorable instruction in human grief... Furiously told and compelling, Churchill's Triumph is a thinking man's bestseller.”—The Guardian

“Dobbs astutely and dramatically portrays the real story of Yalta, the mighty tussle between the three men upon whose political skills and strength of character the rest of the world would depend... The novel is a triumph because of the author's fine appreciation of history and his meticulous eye for detail.”—The Times

“Michael Dobbs brings the Second World War to a resounding close... Dobbs portrays Churchill as being all too human - oversensitive and easily hurt by friendship betrayed, and conjures up Roosevelt's stricken response beautifully... Dobbs is a fine writer and neatly sums up the appeal of historical novels. Not only can they fill in the gaps left by an inaccurate, incomplete or contradictory factual record, but they can capture the spirit of the thing. Dobbs has certainly done that here.”—Daily Telegraph

“It's all too easy to forget that you're not reading an insider's account of ht real events that shaped the modern world. Dobbs clearly has an instinctive feel for what makes powerful men tick.”—The Mail on Sunday

Michael Dobbs is also Lord Dobbs of Wylye, a member of the British House of Lords. He is Britain’s leading political novelist and has been a senior adviser to Prime Ministers Margaret Thatcher, John Major and David Cameron. His bestselling books include House of Cards, which was made into an award winning TV series in the UK and is currently being remade into a major US television series by Kevin Spacey and the director David Fincher. Read more on his website - www.michaeldobbs.com.
Reviews
Write Your Own Review
VIEW
9781402210457
All content and design copyright © Sourcebooks, LLC 2021. All Rights Reserved.