A Novel of Defiance 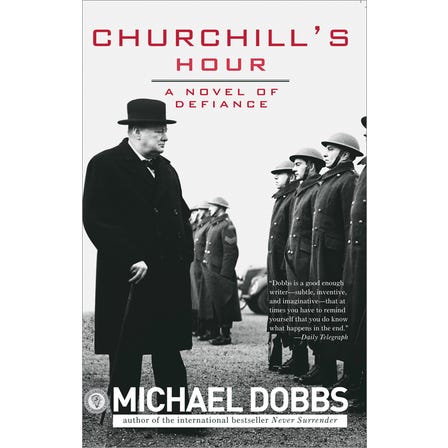 From Michael Dobbs, author of the book that inspired the smash hit Netflix series House of Cards, Churchill’s Hour is a stunning novel that brings Prime Minister Winston Churchill to life during the midst of WWII.

It is 1941, a year of desperation for England as it is battered by the war. Churchill has only one hope, that the U.S. will come to his country's aid, but Roosevelt is unwilling to do so because America is wedded to isolationism.

The political difficulties Churchill faces are compounded by a very personal dilemma. Pamela, the wife of his dissolute son, Randolph, has fallen in love with FDR's special envoy to England, Averill Harriman. With England threatened by a German invasion and a desperate Russia devastated by the advancing Nazi onslaught, Churchill must convince America that his cause is theirs. The secret of how he does so is so damning he will take the knowledge to his grave. Following his acclaimed Churchill novels Never Surrender and Churchill's Triumph, Dobbs' powerful reimagining makes England's feisty prime minister jump off the page.

"Churchill as nature intended: Dobbs captures his famous subject with artistry. With every stroke of his brush, he etches the character deeper into the memory. It is beautifully done."—Sunday Telegraph

"Riveting and controversial... Dobbs has the gift of taking you inside his subject's head."—Glasgow Evening Times

"Michael Dobbs has always had an uncanny feel for current affairs... This is a typically masterful page-turner."—Hampstead and Highgate Express

"Intriguing political drama from a master of the genre."—Irish Independent

"An insightful look back in time - Four Stars."—Sunday Express

Michael Dobbs is also Lord Dobbs of Wylye, a member of the British House of Lords. He is Britain’s leading political novelist and has been a senior adviser to Prime Ministers Margaret Thatcher, John Major and David Cameron. His bestselling books include House of Cards, which was made into an award winning TV series in the UK and is currently being remade into a major US television series by Kevin Spacey and the director David Fincher. Read more on his website - www.michaeldobbs.com.
Reviews
Write Your Own Review
VIEW
9781402213922
All content and design copyright © Sourcebooks, LLC 2021. All Rights Reserved.