My Lady of Cleves

By Margaret Campbell Barnes
$18.99
Be the first to review this product 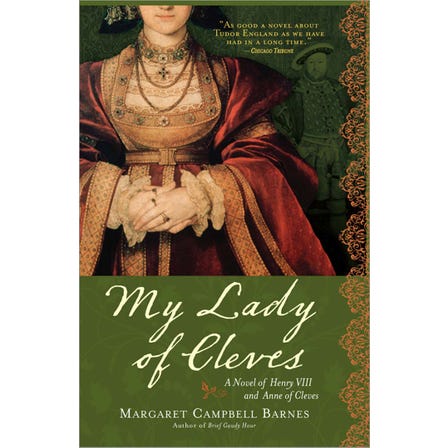 "Turns A BRILLIANT LIGHT on one of the lustiest and one of the most dramatic periods of English history."—Philadelphia Inquirer

The mesmerizing story of Anne of Cleves, fourth wife of Henry VIII, one of the rare women who matched wits successfully with the fiery king and lived to tell the tale.

Aware of the disastrous consequences of not bearing an heir, Anne of Cleves bravely took on the duty of weathering the Tudor King's temper and won the hearts of his subjects in the process.

Written by world-renowned historical novelist Margaret Campbell Barnes, My Lady of Cleves gives readers an intimate portrait of the warm, unpretentious princess who never expected to become Queen of England and how she navigated a world of high drama and courtly elegance.

A refreshing historical fiction about infamous Tudor England, fans of Philippa Gregory, Anya Seton and Bernard Cornwell will delight in this tale of Henry's fourth Queen, her secret love, her power-hungry husband, and the country that ruled them all.

Praise for My Lady of Cleves:
"At long last Anne of Cleves gets her day as a noble and highminded heroine in the lists of historical fiction!" — Chicago Tribune
"Barnes' vision of Anne is so different from others I have encountered, it was like reading her story for the first time. This is the Anne of Cleves I choose to live in my memory." —Books N Border Collies
"an appealing story of a woman who makes the best of a bad situation… it's nice to see this novel in particular being reissued." —Reading, Ranting, and Raving
"I have to say that from the moment I read the inscription, I was hooked in this book... Anne is brought to life, and is portrayed as a capable woman..." —Historical Tapestry

New York Times bestseller Margaret Campbell Barnes, now deceased, wrote several historical novels, including Brief Gaudy Hour, My Lady of Cleves, King's Fool, The Tudor Rose, Within the Hollow Crown, With All My Heart, Isabel the Fair, The King's Bed, Lady on the Coin, and Mary of Carisbrooke. Her novels have sold more than 2 million copies worldwide.