A Novel of Conspiracy

By Michael Dobbs
$21.99
Be the first to review this product 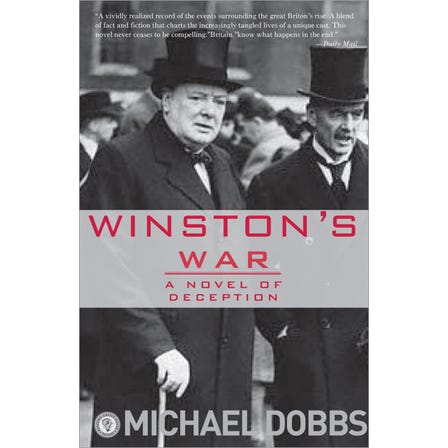 From Michael Dobbs, author of the book that inspired the smash hit Netflix series House of Cards, comes Winston’s War, a thrilling novel about the dawn of WWII and Winston Churchill’s rise to power.

At the beginning of WWII, Neville Chamberlain believes he has bought "peace for our time" from Adolph Hitler, who has just seized Czechoslovakia's Sudetenland. The English are alarmed by the huge German army, while the soldiers that would defend London don't even have steel helmets. For many, compromise and appeasement seem to be England's best defense.

But there are a few leaders who don't agree. Among them is Winston Churchill, who understands that the relentless march of fascism will be democracy's death knell. In October 1938, Churchill pleads his case in the press to the BBC's Guy Burgess. One of these two will become the most revered man of his time, and the other will be known as the greatest of traitors.

This stunning novel brings to life the surprising political intrigues that set the stage for World War II, and brings alive the passionate, grumpy, whiskey-drinking Winston Churchill, as he inspires his fellow countrymen to take on the world's mightiest army.

"An intriguing tale of espionage and treason... this is a work to enthrall."—Daily Mail

"An author who can bring historical happenings so vitally back to life and made all the more impressive by being historically accurate in every respect."—Times of London

"A fascinating tale of conspiracy, blackmail, and treachery."—Irish Independent

"Dobbs takes us so far inside the mind of Winston Churchill that we feel as though we actually are him."—Booklist

"Dobbs has done a brilliant job in evoking the drama and despair of Britain hovering on the edge of the abyss."—Sunday Express

Michael Dobbs is also Lord Dobbs of Wylye, a member of the British House of Lords. He is Britain’s leading political novelist and has been a senior adviser to Prime Ministers Margaret Thatcher, John Major and David Cameron. His bestselling books include House of Cards, which was made into an award winning TV series in the UK and is currently being remade into a major US television series by Kevin Spacey and the director David Fincher. Read more on his website - www.michaeldobbs.com.
Reviews
Write Your Own Review
VIEW
9781402217746
All content and design copyright © Sourcebooks, LLC 2021. All Rights Reserved.