By Margaret Campbell Barnes
$18.99
Be the first to review this product 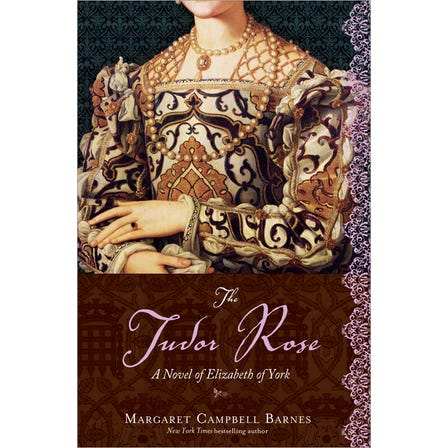 "If you love Historical Fiction or the Tudors, you cannot go wrong by picking up this book." — The Literate Housewife

The richly drawn tale of Elizabeth of York, full of intrigue, lies, and plots to steal the throne

As a young woman, Elizabeth of York has the most valuable possession in all of England—a legitimate claim to the crown. Her quest to do what is right for her country and her family throw her into a tumultuous drama of political intrigue, rebellion, and murder.

Two princes battle to win Britain's most rightful heiress for a bride and her kingdom for his own. On one side is her uncle Richard, the last Plantagenet King, whom she fears is the murderer of her two brothers, the would-be kings. On the other side is Henry Tudor, the exiled knight. Can he save her from a horrifying marriage to a cut-throat soldier?

Thrust into the intrigue and drama of the War of the Roses, Elizabeth has a country within her grasp—if she can find the strength to unite a kingdom torn apart by a thirst for power.

A refreshing historical fiction about infamous Tudor England, fans of Philippa Gregory, Anya Seton and Sharon Kay Penman will delight in this richly drawn tale of the woman who launched one of the most dramatic dynasties England has ever seen.

New York Times bestseller Margaret Campbell Barnes, now deceased, wrote several historical novels, including Brief Gaudy Hour, My Lady of Cleves, King's Fool, The Tudor Rose, Within the Hollow Crown, With All My Heart, Isabel the Fair, The King's Bed, Lady on the Coin, and Mary of Carisbrooke. Her novels have sold more than 2 million copies worldwide.