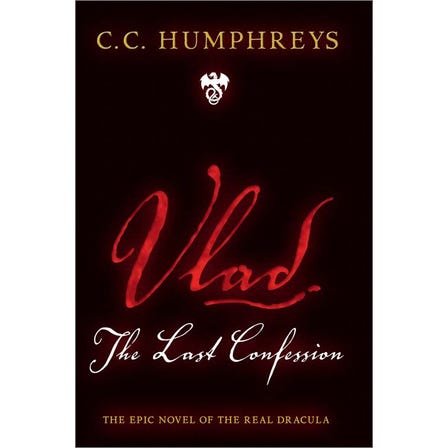 Vlad: The Last Confession is a novel about the real man behind the Bram Stoker myth. It tells of the Prince, the warrior, the lover, the torturer, the survivor and, ultimately, the hero.

Dracula. A name of horror, depravity and the darkest sensuality. Yet the real Dracula was just as alluring, just as terrifying, his tale not one of a monster but of a man…and a contradiction.

His tale is told by those who knew him best. The only woman he ever loved…and whom he has to sacrifice. His closest comrade… and traitor. And his priest, betraying the secrets of the confessional to reveal the mind of the man history would forever remember as The Impaler.

This is the story of the man behind the legend … as it has never been told before.

"Trust nothing that you've heard."
Winter 1431, a son is born to the Prince of Transylvania.
His father christened him "Vlad."
His people knew him as "The Dragon's Son."
His enemies reviled him as "Tepes"—The Impaler.
He became the hero of a nation.
We know him as Dracula.

"'Vlad' is a must for any fan of historical fiction, or those who want another view on the legend of Dracula." — Midwest Book Review

"This was a very fascinating read about the life and times of a mad and compelling man. I was sucked into the story and now I want to learn more about Vlad and his younger brother Radu: The Handsome." — Paranormal & Romantic Suspense Reviews
"C.C. Humphreys has done an excellent job with opening the Western world's eyes to the hero that Vlad was. This is done through highly researched prose, full of great characters but also through further appendices which provide even more information on Vlad Tepes. " — Read All Over Reviews
"What makes a man commit acts of evil? Should this man be forgiven if his motivations were just? All of these questions are posed in the novel, but the answers are left up to the reader. Vlad: The Last Confession by C.C. Humphreys is part history, part epic adventure — an engrossing novel that will surely have you reconsidering other "villains" of the past." — Savvy Verse & Wit
"Hard to put down and impossible to forget...It is a book you can emotionally lose yourself in and let yourself roam deep into the words of the story." — Suite 101 World Literature
"It makes you think harder about what it good, what is evil, and what happens when the two collide and combine within the soul. I love this book. One of the best historical fiction novels I've read. It gets my highest rating and a strong recommendation." — The Biblio Blogazine
Customer Reviews
Write Your Own Review