Before the History You Know...a Novel of Louis XIV 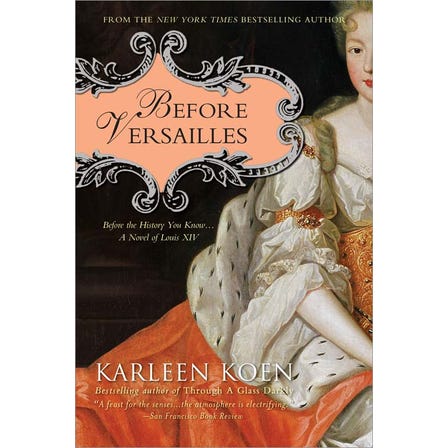 "A grand yet intimate look at the Sun King, a tale rich with detail and action."—Library Journal (Starred Review, one of the best historical novels of the year)

Before Versailles transports you to a world of secret passions and plots, a world of duplicity and malice...a world that created one of the best–known monarchs to grace the French throne.

At the most decisive time in the young king's life, Louis XIV can taste the danger. His court teems with greed and corruption, the wrong woman draws him into a wrenching love affair, and a mysterious boy in an iron mask haunts the woods. The untried ruler is coming into his own in 1661, and Louis XIV must face what he is willing to sacrifice for honor and for love.

Meticulously researched and gorgeously brought to life by New York Times bestselling author Karleen Koen, Before Versailles offers up a sumptuous, authentic exploration of a time that forged a man into a king.

Praise for Before Versailles:

"In this magnificently written and researched novel, Karleen Koen brings to vibrant life the early years and loves of the future Sun King."—Jean M. Auel, author of The Clan of the Cave Bear and the Land of Painted Caves

"A baroque cornucopia spilling over with intrigue, passion, jealousy, ambition, and rich historical detail, Before Versailles offers a glittering glimpse of the crucial months that shaped Louis XIV into Europe's most powerful monarch."—Eleanor Herman, author of Sex with Kings