By Lindsay Ashford
$19.99
Be the first to review this product 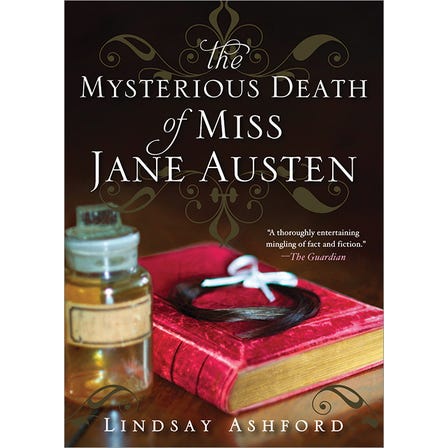 "Ashford cleverly weaves historical facts into a whodunit written in Austen's style. Janeites may be enthralled or appalled, but they'll agree that this literate page-turner is thought-provoking."—Kirkus

Pride and Prejudice and… Murder?

Twenty-six years have passed since the death of Jane Austen. Armed with a lock of Austen's hair as perhaps her best clue, Anne Sharp, former governess to the Austen family and Jane's close friend, has decided at last to tell her story—a story of family intrigues, shocking secrets, forbidden loves, and maybe even murder...

Perfect for fans of Death Comes to Pemberley, upon its publication in the UK, Lindsay Ashford's fictional interpretation of the few facts surrounding Jane Austen's mysterious death sparked an international debate and uproar. None of the medical theories offer a satisfactory explanation of Jane Austen's early demise at the age of forty-one. Could it be that what everyone has assumed was a death by natural causes was actually more sinister? Lindsay Ashford's vivid novel delves deep into Austen's world and puts forth a shocking suggestion—was someone out to silence her?

Lindsay Ashford is an award-winning British mystery novelist and journalist. Her writing has been compared to that of Vivien Armstrong, Linda Fairstein and Frances Fyfield. Raised in Wolverhampton, Ashford became the first woman to graduate from Queens’ College, Cambridge in its 550 year history. She gained a degree in Criminology and in 1996, took a crime writing course run by the Arvon Foundation. Ashford divides her time between a home on the Welsh coast near Aberystwyth, Wales and the village of Chawton (Jane Austen's home) in Hampshire.
Reviews
Write Your Own Review
VIEW
9781402282126
All content and design copyright © Sourcebooks, LLC 2021. All Rights Reserved.