By James Aitcheson
$19.99
Be the first to review this product 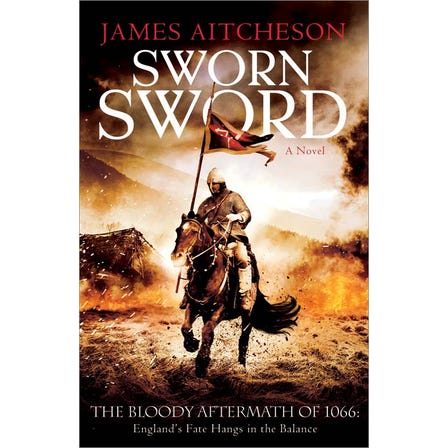 Enter into a ruthless, formidable world, where violent warriors seek honor in holy places and holy men seek glory in dark deeds. As the two opposing forces battle for conquest, the fate of England hangs in the balance

January, 1069: Less than three years after the Battle of Hastings in 1066 and the death of the usurper, Harold Godwineson, two thousand Normans march in the depths of winter to subdue the troublesome province of Northumbria. Tancred a Dinant,a loyal and ambitious knight, is among them, hungry for battle, honor, silver, and land.

But at Durham, the Normans are ambushed in the streets by English rebels, and Tancred’s revered lord Robert de Commines is slain. Badly wounded, Tancred barely escapes with his own life. Bitterly determined to seek vengeance for his lord’s murder, the dauntless knight quickly becomes entrenched in secret dealings between a powerful Norman magnate and a shadow from the past. As the Norman and English armies prepare to clash, Tancred uncovers a cunning plot that harks back to the day of Hastings itself. If successful, it threatens to destroy the entire conquest—and change the course of history.

James Aitcheson was born in Wiltshire, England, in 1985 and studied History at Emmanuel College, Cambridge, where he developed a special interest in the medieval period. Sworn Sword is his first novel.
Reviews
Write Your Own Review
VIEW
9781402287671
All content and design copyright © Sourcebooks, LLC 2021. All Rights Reserved.