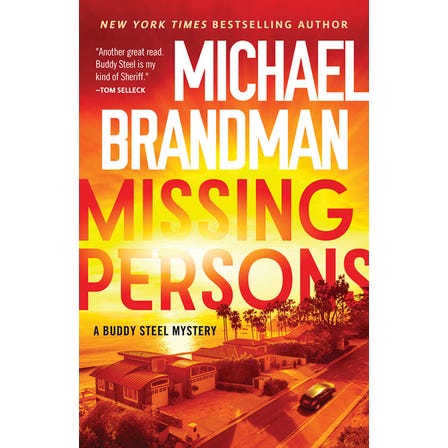 "A terrific read. Buddy Steel is my kind of Sheriff."—Tom Selleck

MISSING PERSONS is the first book in the new Buddy Steel mystery series by New York Times bestselling author, Michael Brandman. Even in a town called Freedom, justice has its price…

LAPD homicide detective Buddy Steel finds himself detoured from his own life when his ailing father, Sheriff Burton Steel, calls him home to Freedom to take over as deputy. Though relations between father and son have always been strained, and Buddy reluctantly agrees to the arrangement.

When he begins investigating the possible disappearance of a famous local televangelist's wife, he is met with outright antagonism. While the highly-secured husband insists that his wife is simply visiting a relative, the housekeeper who reported her missing fears she may have been murdered. And no one, from family members to ministry security and staff to the prosecutor's office seems inclined to help Buddy in his investigation. In fact, many go out of their way to stop him.

But the more he pokes and prods, the more he realizes that the Bible-thumping family and their television empire may be an elaborate cover for a less-than-holy enterprise. This is far more than a typical missing person case. But how far up does the corruption reach—and will Buddy pay the ultimate price for refusing to look the other way?

MISSING PERSONS is an emotionally propulsive thriller perfect for fans of Robert B. Parker, Sue Grafton, and Michael Connelly. Because there are dark secrets buried in this small town, and a missing person threatens to unearth them all—with deadly consequences.