By George Bellairs
Introduction by Martin Edwards
$14.99
Be the first to review this product 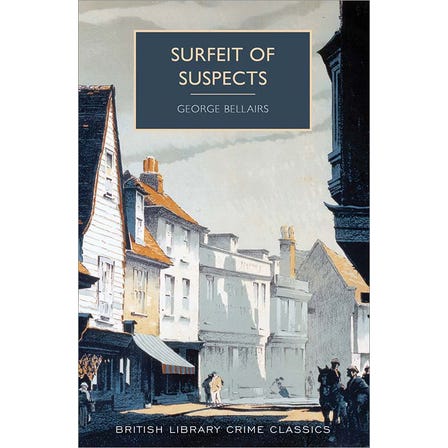 Discover the captivating treasures buried in the British Library's archives. Largely inaccessible to the public until now, these enduring classics were written in the golden age of detective fiction.

"At 8 o'clock in the evening on the 8th of November, there was a terrific explosion in Green Lane, Evingden."

The offices of the Excelsior Joinery Company have been blown to smithereens; three of the company directors are found dead amongst the rubble, and the peace of a quiet town in Surrey lies in ruins. When the supposed cause of an ignited gas leak is dismissed and the presence of dynamite revealed, Superintendent Littlejohn of Scotland Yard is summoned to the scene.

But beneath the sleepy veneer of Evingden lies a hotbed of deep-rooted grievances. The new subject of the town's talk, Littlejohn's investigation is soon confounded by an impressive cast of suspicious persons, each concealing their own axe to grind.

First published in 1964, Bellairs' novel hearkens back to the classic British mysteries and crime books. A masterpiece of misdirection, Surfeit of Suspects is a story of small-town grudges with calamitous consequences that revels in the abundant possible solutions to its central, explosive crime.

Other books in the British Library Crime Classics:
Death in Fancy Dress
Smallbone Deceased
It Walks by Night
Measure of Malice
The Body in the Dumb River
Death Has Deep Roots
The Notting Hill Mystery

GEORGE BELLAIRS was the pseudonym of Harold Blundell (1902—1985), a prominent banker and philanthropist from Manchester who became the author of a popular series of detective stories featuring Thomas Littlejohn, which were published for nearly forty years.
Martin Edwards
Reviews
Write Your Own Review
VIEW
9781464211737
All content and design copyright © Sourcebooks, LLC 2021. All Rights Reserved.