By Hillary Waugh
$15.99
Be the first to review this product 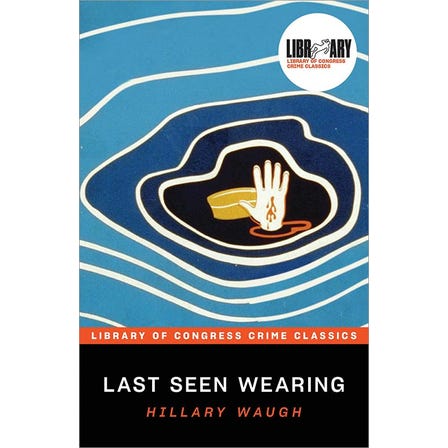 No one saw her leave, and no one knows where she went...

It's a perfectly typical day for Lowell Mitchell at her perfectly ordinary university in Massachusetts. She goes to class, chats with friends, and retires to her dorm room. Everything is normal until suddenly it's not—in the blink of an eye, Lowell is gone.

Facts are everything for Police Chief Frank Ford. He's a small-town cop, and he knows only hard evidence and thorough procedure will lead him to the truth. Together with the wise-cracking officer Burt Cameron, the grizzled chief will deal with the distraught family, chase dead-end leads, interrogate shady witnesses, and spend late nights ruminating over black coffee and cigars. Everyone tells him what a good, responsible girl Lowell is. But Ford believes that Lowell had a secret and that if he can discover it, this case will crack wide open.

Considered one of the first-ever police procedurals and hailed as an American mystery milestone, Last Seen Wearing—based on a true story—builds suspense through its accurate portrayal of an official police investigation. Hillary Waugh, who earned the title of Grand Master from the Mystery Writers of America, went on to create several memorable series, but this classic crime novel ranks among his finest work.

This next installment in the Library of Congress Crime Classics series will keep readers in suspense until the final page.

Hillary Waugh (1930-2008) was a pioneering American mystery novelist. In 1989, Waugh was named a Grand Master by the Mystery Writers of America.
Reviews
Write Your Own Review
VIEW
9781464213052
All content and design copyright © Sourcebooks, LLC 2021. All Rights Reserved.