By David P. Wagner
$12.99
Be the first to review this product 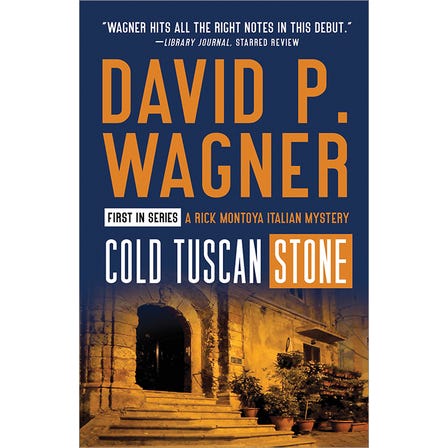 "Wagner hits all the right notes in this debut. His likable protagonist engages, plus the Italian angle is always appealing. Perfect for readers who enjoy a complex puzzle, a bit of humor, and a fairly gentle procedural. Don't miss this one."—Library Journal STARRED review

When Rick Montoya moves to Italy to work as a translator, he doesn't expect to get involved in an investigation. But with one favor spiraling out of control, he soon finds himself fighting for his life.

Rick Montoya has moved from New Mexico to Rome, embracing the life of a translator. He's settling in to la dolce vita when a school friend who is now senior in the Italian Art Squad recruits Rick for an unofficial undercover role. Armed with a list of galleries, suspects, and an expense account, Rick arrives in Tuscany posing as a buyer for a gallery, ready to spend his days sipping wine and examining Roman artifacts to flush out burial urn traffickers.

But before sunset on Rick's first day in Volterra, a gallery employee dies in a brutal fall from a high cliff.

The local Commissario and his team consider Rick an amateur, and worse, a foreigner. And now they suspect him in the dead man's murder. While the Volterra squad pursues its leads, Rick continues to meeting his own suspects: a museum director, a top gallery owner, a low-profile import/export businessman and his enterprising color-coordinated assistant, and a sensuous heiress with a private art specialty and clientele.

As the murder mystery and the art trafficking heat up, has Rick's role made him the target of both cops and criminals?

The first Tuscan book in David P. Wagner's Italian mysteries introduce us to Rick Montoya, an American translator who agrees to help catch art smugglers—and soon finds himself in over his head.

Other books in the Rick Montoya Italian Mysteries:
Cold Tuscan Stone
Death in the Dolomites
Murder Most Unfortunate
Return to Umbria
A Funeral in Mantova

David P. Wagner is a retired foreign service officer who spent nine years in Italy, learning to love things Italian. Other diplomatic assignments included Brazil, Ecuador, and Uruguay, as well as two hardship postings to Washington, D.C. He and his wife, Mary, live in Pueblo, Colorado.
Reviews
Write Your Own Review
VIEW
9781464214646
All content and design copyright © Sourcebooks, LLC 2021. All Rights Reserved.