The Moon in the Palace

By Weina Dai Randel
$15.99
Be the first to review this product 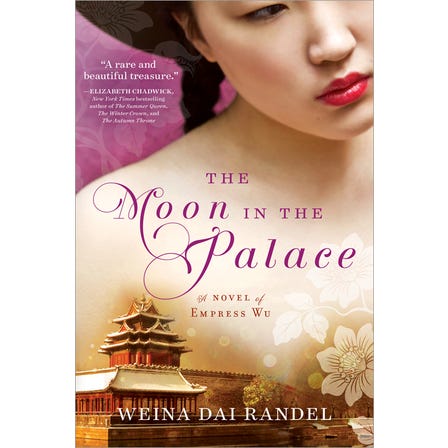 A thrilling work of historical fiction, bringing romance, intrigue, and the unexpected rise of an Empress to intoxicating life under the inscrutable moon.

In Tang Dynasty China, a concubine at the palace learns quickly that there are many ways to capture the Emperor's attention. Many hope to lure in the One Above All with their beauty. Some present him with fantastic gifts, such as jade pendants and scrolls of calligraphy, while others rely on their knowledge of seduction to draw his interest.

Young Mei knows nothing of these womanly arts, yet she will give the Emperor a gift he can never forget. Mei's intelligence and curiosity, the same traits that make her an outcast among the other concubines, impress the Emperor. But just as she is in a position to seduce the most powerful man in China, divided loyalties split the palace in two, culminating in a perilous battle that Mei can only hope to survive.

In the breakthrough first volume in the Empress of Bright Moon duology, Weina Dai Randel paints a vibrant portrait of the Emperor’s Palace—where love, ambition, and loyalty can spell life or death—and the woman who came to rule all of ancient China.

"I absolutely loved The Moon in the Palace... A rare and beautiful treasure."—Elizabeth Chadwick, NYT bestselling author

Weina Dai Randel was born and raised in China. Her passion for history compels her to share classical Chinese literature, tales of Chinese dynasties, and stories of Chinese historical figures with American readers. She is an adjunct professor and is also a member of the Historical Novel Society.
Reviews
Write Your Own Review
VIEW
9781492613565
All content and design copyright © Sourcebooks, LLC 2021. All Rights Reserved.