The Empress of Bright Moon

By Weina Dai Randel
$15.99
Be the first to review this product 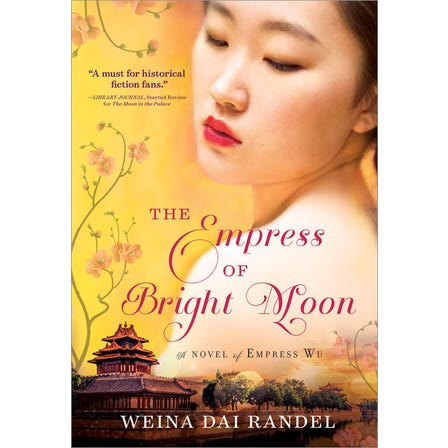 The time for taking hold of her destiny is now

At the moment of the Emperor’s death, everything changes in the palace. Mei, his former concubine, is free, and Pheasant, the heir and Mei’s lover, is proclaimed as the new Emperor, heralding a new era in China. But just when Mei believes she's closer to her dream, Pheasant's chief wife, Lady Wang, powerful and unpredictable, turns against Mei and takes unthinkable measures to stop her. The power struggle that ensues will determine Mei's fate–and that of China.

Surrounded by enemies within the palace that she calls home, Mei continues her journey to the throne in The Empress of Bright Moon, the second book in Weina Dai Randel’s acclaimed duology. Only by fighting back against those who wish her harm will Mei be able to realize her destiny as the most powerful woman in China.

Weina Dai Randel was born and raised in China. Her passion for history compels her to share classical Chinese literature, tales of Chinese dynasties, and stories of Chinese historical figures with American readers. She is an adjunct professor and is also a member of the Historical Novel Society.
Reviews
Write Your Own Review
VIEW
9781492613596
All content and design copyright © Sourcebooks, LLC 2021. All Rights Reserved.