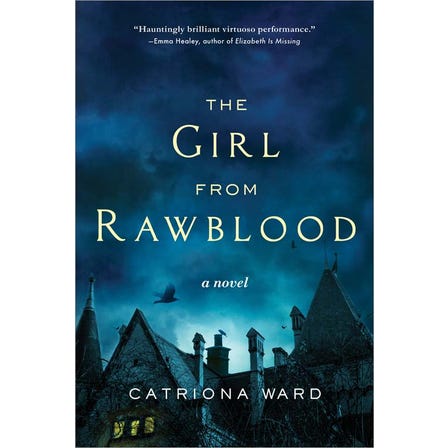 What if it's not your house that's haunted—it's you? For generations, the Villarcas have died young, under mysterious circumstances. Now Iris and her father will finally find out why…

Young Iris Villarca is the last of her family's line. They are haunted by "her," a curse passed down through the generations that marks each Villarca for certain heartbreak and death. But Iris dares to fall in love, and the consequences of her choice are immediate and terrifying. As the world falls apart around her, she must take a final journey back to Rawblood where it all began, and where it must all end…

Fans of Susan Hill, Shirley Jackson, and Silvia Moreno-Garcia will love The Girl from Rawblood. If you love classic hauntings and atmospheric gothic horror, you won't want to miss it!

Praise for The Girl from Rawblood:
"Leaves the reader breathless in its gothic tale of fear, family, blood, and love."—Simone St. James, award-winning author of The Broken Girls
"Brilliant—The Girl From Rawblood is the old-school gothic novel I have been waiting for… Stunningly original."—Mike Mignola, creator of the Hellboy comic book series
"A story to satisfy the most gothic of hearts… Sentence by sentence, Catriona Ward made herself one of my very favorite writers."—Kelly Link, award-winning author and Pulitzer Prize Finalist for Get in Trouble
"A hauntingly brilliant virtuoso performance."—Emma Healey, author of Whistle in the Dark
"A gothic tale of love and madness, this atmospheric and chilling story drew me in from the first page."—Claire Fuller, author of Our Endless Numbered Days
"Beautifully written, in equal parts both terrifying and heart-breaking, The Girl from Rawblood is a dazzlingly brilliant Gothic masterpiece."—Sarah Pinborough, author of Dead to Her
"A lush, macabre, chillingly good tale… The Girl from Rawblood is not only a ghost story of the highest order, but a sublime meditation on the things that hold us captive: fidelity, fear, memory, love."—Leslie Parry, author of The Church of Marvels

Trade Reviews
"...superb debut....Wade perfectly balances sensory richness with the chills of the uncanny." — Publishers Weekly, STARRED review
"Ward's layered and skillfully crafted novel weaves elements of classic gothic and horror into a remarkable story populated by unforgettable characters, palpable atmosphere, and rich lyricism. Imagine the darkest and goriest undertones of Edgar Allan Poe, the Brontes, Charles Dickens, and Shirley Jackson, and you'll have an idea of what Ward offers here." — Library Journal
"[an] atmospheric debut" — Booklist
"With a nod to the Gothic novels of old, the narrative travels back in time and from England to Italy, in order to bring to life this haunting, mysterious tale." — Bookish
"With a ghostly face at the window, inexplicable events and a sense of menace hanging over every page, this is one chilling gothic novel." — Daily Mail
"The west-country moors have been the setting for some of the most memorable of unsettling stories in British literature; there's something about that unconquerable space that threatens us, even now. The Girl from Rawblood is a continuation of our long-standing fear of the bleak expanse of the wide-open, so far from shelter or from normality, and it's brilliant." — Den of Geek
"A gripping and gruesome story of death, war, mental health, scientific experimentation, opium addiction and ill-fated, fateful love. Chillingly good." — Express
"The ghost story is back" — Guardian
"an extended stalk through the history of the English ghost story . . . the pleasures of the ghost story are presented in such abundance, and carried off in such fine style . . . savor the allusive gusto" — Literary Review
"A ghostly, achingly sad, yet excruciatingly beautiful debut . . .Catriona Ward has created a moving, original tale of love and destruction, one that is truly enthralling and memorable." — LoveReading
"genuinely frightening . . . Like the best classic Gothic novels (Dracula, Frankenstein, The Castle of Otranto), The Girl from Rawblood relies on partially informed narrators telling their own stories . . . As a meta-examination of the Gothic genre and as a straightforward tale of grisly haunting, Ward's novel is remarkably successful" — Spectator
"The Girl from Rawblood is a fiercely original work of horror fiction that draws from its antecedents not in the manner of a vampire sucking blood, but of a thirsty artisan raising water from a well . . . a damn fine story, well paced and genuinely disturbing and achingly sad. This is one of those novels that leaves you loath to read anything else for a while, the world it evokes is so complete and so richly imagined. The Girl from Rawblood delivers all the mystery and menace that one might hope for in a classic ghost story. Moreover, it does not shrink from the ineffable. Fans of supernatural horror need not be disappointed: in The Girl from Rawblood, the ghosts are real." — Strange Horizons
"an impressively hectic spin on the Gothic tradition" — Telegraph
Customer Reviews
Write Your Own Review