Murder between the Lines 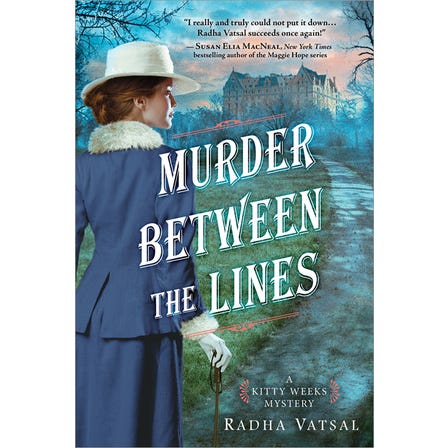 "I really and truly could not put it down... Vatsal succeeds once again!”—Susan Elia MacNeal, New York Times-bestselling author of the Maggie Hope series

Intrepid journalist Kitty Weeks returns in the second book in this acclaimed WW1-era historical mystery series to investigate the death of a boarding school student.

When Kitty's latest assignment for the New York Sentinel Ladies' Page takes her to Westfield Hall, she expects to find an orderly establishment teaching French and dancing—but there's more going on at the school than initially meets the eye.

Tragedy strikes when a student named Elspeth is found frozen to death in Central Park. The doctor's proclaim that the girl's sleepwalking was the cause, but Kitty isn't so sure.

Determined to uncover the truth, Kitty must investigate a more chilling scenario—a murder that may involve Elspeth's scientist father and a new invention by a man named Thomas Edison.

For fans of Jacqueline Winspear and Rhys Bowen, Murder Between the Lines combines true historical events with a thrilling mystery.

Additional Praise for Murder between the Lines: