By Kelli Estes
$15.99
Be the first to review this product 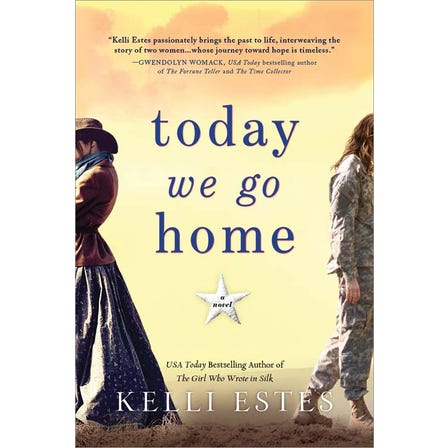 "Today We Go Home shines an illuminating light on history and the female soldiers who have served this country from the Civil War to Afghanistan today. Kelli Estes passionately brings the past to life, interweaving the story of two women from different centuries whose journey towards hope is timeless."—GWENDOLYN WOMACK, USA Today bestselling author of The Fortune Teller and The Time Collector

Seattle, Washington: Larkin Bennett has always known her place, whether it's surrounded by her loving family in the lush greenery of the Pacific Northwest or conducting a dusty patrol in Afghanistan. But all of that changed the day tragedy struck her unit and took away everything she held dear.

Soon after the disaster, Larkin discovers an unexpected treasure—the diary of Emily Wilson, a young woman who disguised herself as a man to fight for the Union in the Civil War. As Larkin struggles to heal, she finds herself drawn deeply into Emily's life and the secrets she kept.

Indiana, 1861: The only thing more dangerous to Emily Wilson than a rebel soldier is the risk of her own comrades in the Union Army discovering her secret. But, as the war marches on and takes its terrible toll, Emily begins to question everything she thought she was willing to risk her life for.

Historical fiction fans of Marie Benedict, Beatriz Williams, and Kate Quinn will be inspired by this story of two women in militaries, separated by centuries, but united in hope and dignity.

Kelli Estes lived in the deserts of eastern Washington state and Arizona before settling in the Seattle area, which she loves so much she plans to forever live near the water. She's passionate about stories that help us see how the past shaped who we are today, and how we all have more in common than not. She lives in the Pacific Northwest with her family. This is her first novel.
Reviews
Write Your Own Review
VIEW
9781492664185
All content and design copyright © Sourcebooks, LLC 2021. All Rights Reserved.