Trust Me When I Lie

Ships to United States, Canada, Philippines, Guam and 5 other countries. 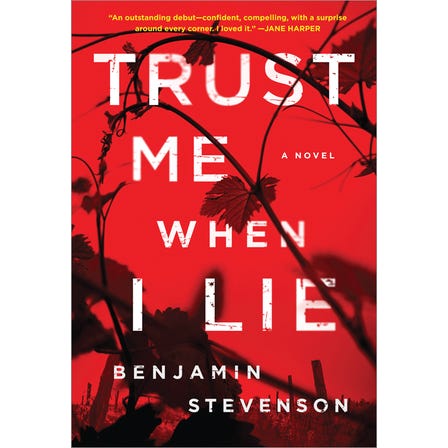 "An outstanding debut—confident, compelling, with a surprise around every corner. I loved it."—Jane Harper, New York Times bestselling author of The Dry

For fans of true crime TV shows like Making a Murderer, and podcasts like Serial, Trust Me When I Lie is a thrilling mystery that proves the only difference between the hero of a story and the villain is your perspective.

Producer Jack Quick knows how to frame a story so the murder mystery makes an impact. So says the subject of Jack's new true crime docuseries, Curtis Wade, who was convicted for killing a young woman four years ago. In the eyes of Jack's viewers, flimsy evidence and police bias sent an innocent man to jail...but off-screen, Jack himself has doubts. Curtis could be a murderer.

But when the series finale is wildly successful, a retrial sees Curtis walk free. And then another victim turns up dead.

To set things right, Jack goes back to the sleepy vineyard town where it all began, bent on discovering what really happened. Because behind the many stories he tells, the truth is Jack's last chance. He may have sprung a killer from jail, but he's also the one that can send him back.

A novel examining the darkness that lurks beneath the stories we tell ourselves, Trust Me When I Lie, is the perfect book for fans of true crime exposés like I'll Be Gone in the Dark, and riveting murder mysteries like The Trespasser by Tana French.