Death at the Durbar 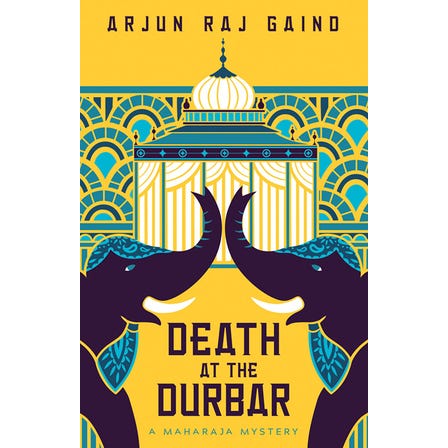 December, 1911. All of India is in a tizzy. A vast tent city has sprung up outside the old walled enclave of Mughal Delhi, where the British are hosting a grand Durbar to celebrate the coronation of the new King, George V. From across India, all the Maharajas and Nawabs have gathered at the Viceroy of India's command to pay homage and swear loyalty to the King Emperor, the first monarch of England to travel out to India personally.

Maharaja Sikander Singh of Rajpore is growing increasingly bored, cooling his heels at the Majestic Hotel as he awaits George V's arrival. Just as his frustration is about to peak, a pair of British officers shoulders in. They insist that he accompany them to the British Encampment. Irked, but his curiosity piqued, Sikander agrees. To his surprise, they take him to the King Emperor's quarters where Sikander's old school friend, Malik Umar Hayat Khan, the Durbar herald, awaits. Malik Umar is serving Lord Hardinge, the Viceroy and the highest-ranked Englishman in the country. Lord Hardinge, overruling several subordinates, tells Sikander that his services as a sleuth are needed by King and country. Sworn to secrecy, Sikander is ushered into George V's personal chambers.

And there he finds the cause for his extraordinary summons—an exquisite nautch-girl, hanged until dead. Employing techniques he has learned from studying Eugene Vidocq and Sherlock Holmes, Sikander examines the scene and demonstrates the girl was not a suicide, but murdered.

Her death at the very heart of the encampment could ruin the enormously costly celebration and spark deep political repercussions in India and in England. Under this pressure, the Viceroy hands Sikander both the case to solve and a ticking clock—he must complete his investigation before George V arrives. And under the surveillance of one Captain Campbell of an elite British regiment.

The list of suspects and motives is too large, the number of hours for the task too few. But he gave his word and so the Maharaja must put his skills to work. In the end, Sikander wishes he had not.

Trade Reviews
"Golden age fans will appreciate how Sikander works his way through an array of suspects. Once again, Gaind successfully blends detection with history." — Publishers Weekly STARRED Review
"The middle volume in Gaind's Maharaja Mystery trilogy is both an homage to vintage British whodunits of the 1930s and a wry comedy of manners." — Kirkus Reviews
"This is the second Maharaja mystery. The author is familiar with the culture and politics of the era, and he paints a rich, thorough picture of India during the Raj period. It's enjoyable as a historical novel as well as a well-written mystery." — Historical Novel Society
Customer Reviews
Write Your Own Review