By Kathryn Le Veque
$8.99
Be the first to review this product 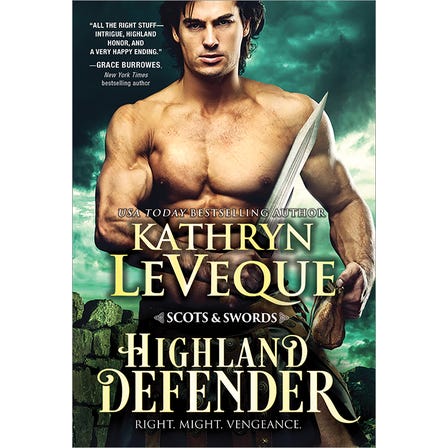 Ashamed of a decision he made in battle that cost good men their lives, the dark Highlander Bane Morgan escapes to Edinburgh to forget his past. But the more time he spends away from his Highland home, the more he's filled with regret and despair.

Lucia Symington knows something about despair. Forced to work off a family debt for a clan with little moral compass and a particular hatred for her, Lucia loses herself a little more each day. When a chance meeting with Bane gives them both a glimpse of what their future together could be, Bane pledges himself to the Ludus Caledonia, the warrior training club where he can reconnect to the fire for justice that still burns within him. The Highland Defender has returned…only to discover that his quest to free his lady could cost them both everything…

Kathryn is a multiple award nominee and winner, including the winner of Uncaged Book Reviews Magazine "Raven Award" for Favorite Medieval Romance and Favorite Cover. Kathryn is also a multiple RONE nominee for InD’Tale Magazine, holding the record for the number of nominations. In 2018, her novel WARWOLFE was the winner in the Romance category of the Book Excellence Award and was also a finalist for several other awards. Kathryn has also hit the USA Today Bestseller list more than 15 times.

Kathryn is considered one of the top Indie authors in the world with over 2M copies in circulation, and her novels have been translated into several languages.