A Plague of Angels 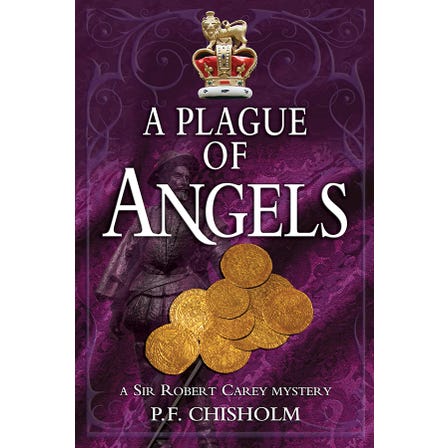 In 1592, dashing courtier Sir Robert Carey took up his northern post as Warden of the West March in order to escape the complications of creditors and court life. Trouble, however, dogs his heels wherever he goes. And where he goes in autumn, after the summer's misadventures in Carlisle, is back to London upon a summons from his father.

Carey is on difficult terms with his powerful sire, Henry, Lord Hunsdon. Hunsdon, son of Anne Boleyn's elder sister, Mary -- and probably of a young King Henry VIII -- swings a lot of weight as ""cousin"" to Queen Elizabeth. But Hunsdon needs his ingenious younger son, Carey to sort out the difficulties his elder son has got himself into as an innocent party in a plot to discredit the family.

Accompanied by the shrewd Sergeant George Dodd, who's like a fish out of water as he copes with the strange Londoners, Carey tackles Catholics, treachery, and such persons known to history and students of literature as George Greene and Christopher Marlowe who are working as spies and double agents. Most arresting is a portrait of a love-sick, snivelling hanger-on named Will Shakespeare....

Trade Reviews
"A splendidly detailed picture of 16th-century England..." — Kirkus Reviews
"The book opens with Carey and his sidekick, Sergeant Dodd, on the road to London, a clever and lively scene...Alternately helped and hindered by the playwrights Christopher Marlowe and William Shakespeare, and merely frustrated by the poet Robert Greene, Carey and Dodd dart about the streets of London, visiting bars and churches, literally avoiding the plague as well as the wiles of the lovely Mistress Bassano. Traitors and allies are finally sorted out in the Fleet, a debtor's prison in London that Chisholm (the pseudonym of historical novelist Patricia Finney) portrays in all its sordid misery." — Publishers Weekly
"The fourth Sir Robert Carey mystery finds the Deputy Warden of the West Marshes (on the England/Scotland border) returning to London after the adventures chronicled in A Surfeit of Guns (1997). It's August 1592, and Carey, struggling to scrape together enough cash to pay off his debts, finds himself embroiled in a feud between a couple of playwrights: Robert Greene and a young fellow called William Shakespeare. Chisholm displays a real knack for comedy here..." — Booklist
Customer Reviews
Write Your Own Review