By Sulari Gentill
As low as $23.95
Be the first to review this product 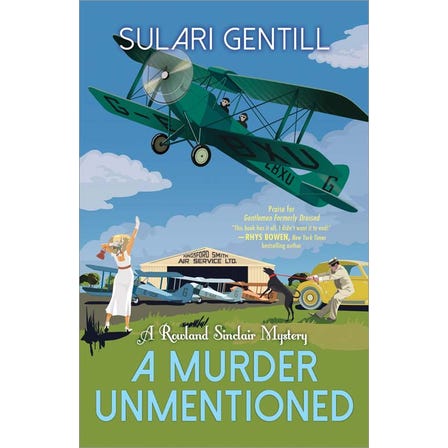 The gun used in Rowland Sinclair's father's death some thirteen years earlier has turned up in a drained dam at the family's country homestead in Yass. And when Rowland offends right-wing New Guard leader Eric Campbell, Campbell uses his influence to set the police to renew their inquiries into Henry Sinclair's death.

Henry's friends had all been led to believe that the wealthy landowner had died in a much more respectable way. Rowland and his elder brother, Wil, had avoided any discussion of the event ever since—in fact the whole family had ducked the issue for over a decade, keeping secret that Sinclair senior was murdered. The possible involvement of the teenage Rowly and his older brother's intervention has been under the radar as well.

But now the finger of blame is pointing squarely at the Sinclair black sheep, a man careless of what society and the authorities think of him. So he and the trio of artist friends who live in his Sydney suburban mansion, and generally have his back, avail themselves of a racing green Gypsy Moth (Rowland is a pioneer in air travel) and a yellow Mercedes sports car (another frightening mode of transport) to arrive in New South Wales' Southern Tablelands, bent on clearing Rowly's name.

With cameo appearances from historical figures—Bob Menzies in the Sinclair kitchen, Edna Walling in the garden, and Kate Leigh grinning lasciviously at Rowly in a jailhouse crowd—and a real sense of fun contrasting with the quite genuine tension, this is historical crime for those in the know and those who can barely remember what happened last weekend, a story of family secrets and fraternal loyalty. Despite the humor, the Rowland Sinclair Mysteries take a deadly serious look at the 1930s, reflecting our own tumultuous times.

After setting out to study astrophysics, graduating in law and then abandoning her legal career to write books, Sulari now grows French black truffles on her farm in the foothills of the Snowy Mountains of NSW. Sulari is author of The Rowland Sinclair Mystery series, historical crime fiction novels (eight in total) set in the 1930s. Sulari’s A Decline in Prophets (the second book in the series) was the winner of the Davitt Award for Best Adult Crime Fiction 2012. She was also shortlisted for Best First Book (A Few Right Thinking Men) for the Commonwealth Writers’ Prize 2011. Paving the New Road was shortlisted for another Davitt in 2013.
Reviews
Write Your Own Review
VIEW
SBCNFG6979
All content and design copyright © Sourcebooks, LLC 2021. All Rights Reserved.