By Triss Stein
As low as $15.99
Be the first to review this product 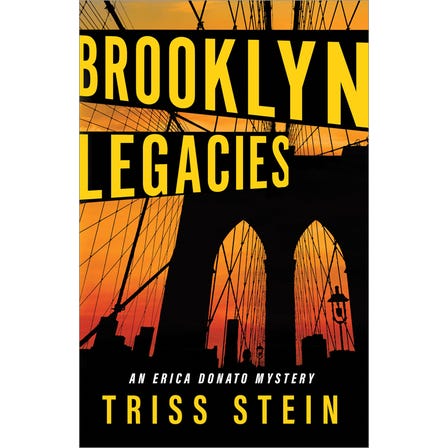 Next in the Erica Donato Mystery Series

Murder strikes the neighborhoods of Brooklyn—the hip, the historic, and the hood

The search for a lost portrait of Brooklyn's own genius Walt Whitman sends urban historian and curator of mysteries Dr. Erica Donato into Brooklyn Heights, a neighborhood of quaint and charming streets, family names out of history, and spectacular views of the harbor and the world-famous bridge. New York's first suburb has long weathered political battles about neighborhood preservation and destruction. Is a new one shaping up?

Erica meets an idol, fiery community activist Louisa Gibbs, now locked in a dispute with the Watch Tower Society. One of Brooklyn's biggest landowners, the Jehovah's Witnesses are selling off their holdings. Then at a glittering party, Erica meets the threatening Prinzig clan who are trying to buy the Witness's property adjoining Louisa's historic home.

The discovery of the Society's Daniel Towns' body in the Witnesses' underground tunnels reignites old conflicts. Erica learns Louisa has made bitter enemies in her time while she becomes steadily better acquainted with a collection of characters young and old, sane and not-so-sane, living and dead. They all carry bitter secrets and old enmities.

The beautiful setting only hides them. Can Erica use her research expertise to expose a killer?

When curator of mysteries Dr. Erica Donato takes on a case in the historical neighborhood of Brooklyn Heights, she finds herself facing long-buried, deadly secrets. Can she find answers before more people fall victim to the sins of the past?

This intricately woven, Brooklyn-led mystery is:

Triss Stein is a small-town girl who has spent most of her adult life living and working in New York City. This gives her the useful double vision of a stranger and a resident which she uses to write mysteries about Brooklyn, her ever-fascinating, ever-changing, ever-challenging adopted home. Brooklyn Legacies is the fifth Erica Donato mystery, following Brooklyn Bones, Brooklyn Graves, Brooklyn Secrets, and Brooklyn Wars.
Reviews
Write Your Own Review
VIEW
SBCNFG9347
All content and design copyright © Sourcebooks, LLC 2021. All Rights Reserved.