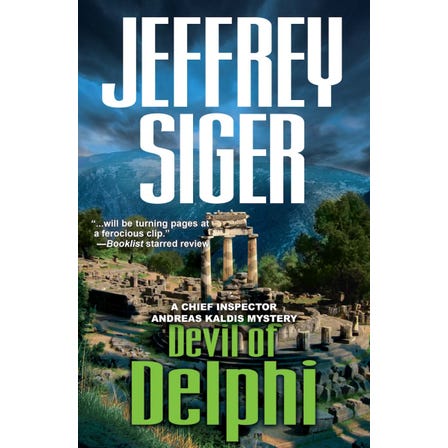 "Siger brings Chief Inspector Andreas Kaldis some very big challenges in his seventh mystery set in troubled contemporary Greece...The final plot twist proves well worth the wait, but it won't take readers long to get there as they will be turning pages at a ferocious clip." —Booklist STARRED review

Delphi once stood at the center of the world, a mountainous, verdant home to the gods, where kings and warriors journeyed to hear its Oracle speak. The Oracle embodied the decree of the gods—or at least the word of Apollo. To disobey risked...everything.

Young Athenian Kharon chooses modern Delphi to rebuild his life among its rolling hills and endless olive groves. But his dark past is too celebrated, and his assassin's skills so in demand, that his fate does not rest entirely in his own hands. Greece is being flooded with bomba, counterfeits of the most celebrated alcoholic beverages and wine brands. The legitimate annual trillion-dollar world market is in peril. So, too, are consumers—someone is not just counterfeiting booze, but adulterating it, often with poisonous substances. Who is masterminding this immensely lucrative conspiracy?

Kharon learns who when the ruthless criminal gives him no choice but to serve her. Her decrees are as absolute as the Oracle's, and as fearsomely punished. Kharon agrees, but dictates his own payoff. And his own methods, which allow his targets some choice in the outcomes.

When Kharon unexpectedly shoots a member of one of Greece's richest, most feared families, he draws Chief Inspector Andreas Kaldis into the eye of a political and media firestorm threatening to bring down Greece's government. Think Breaking Bad, Greek-style.