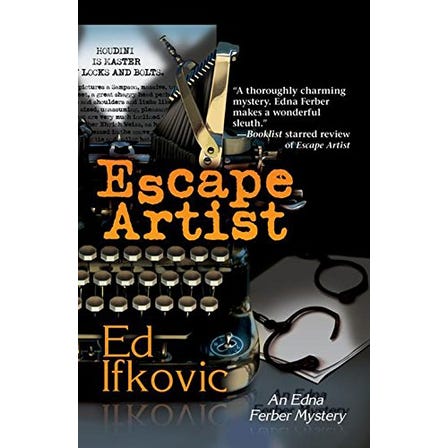 "Who would have thought that, of all the real-life characters to have a second life as detectives, Edna Ferber, now largely forgotten as a writer, would emerge as one of the best?" —Booklist STARRED review

In 1904, Edna Ferber is a 19-year-old girl reporter for the Appleton, Wisconsin, Crescent, an occupation her family considers scandalous for a proper young girl. By chance, she interviews Harry Houdini, in town visiting old friends. When beautiful young Frana Lempke disappears and is soon discovered murdered, the crime baffles the local police; Frana disappeared from a locked room at the high school. Edna asks Houdini for help in solving the murder. But as Edna pursues the story, she senses that she is being followed.

Though she is dedicated to her blind father, Edna's homelife is in disorder. And now the newsroom has become a hostile environment, with a new city editor determined to undermine her....

Trade Reviews
"Set in Hollywood in 1955, Ifkovic's debut...depicted Edna Ferber as a matronly but shrewd established author. This excellent prequel, set in 1904, shows her at the start of her career, a recent high school graduate working as a reporter for her hometown newspaper in Appleton, Wis." — Publishers Weekly STARRED Review
"Only a nitpicker would even wonder how much Ifkovic's version resembles the real woman, for the reader is entranced by her plucky spirit and sharp-witted investigative skills. Houdini, too, is a very well designed character. This isn't his first fictional appearance, but it's definitely one of his best, and if Ifkovic can manage it without overstretching the bounds of credibility, it would be great to see the escape artist and the girl reporter team up again. Who would have thought that, of all the real-life characters to have a second life as detectives, Edna Ferber, now largely forgotten as a writer, would emerge as one of the best?" — Booklist STARRED Review
"The author does a fine job of writing a sequel to Lone Star, set at the opposite end of Edna's life. Stylistically, it's as if we're in Booth Tarkington country, with a leisurely pace and a society with clearly defined boundaries. A gentle read." — Library Journal
Customer Reviews
Write Your Own Review