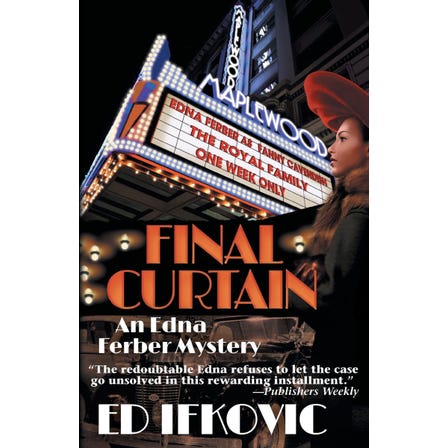 Who murdered the handsome young actor? And why?

In 1940, against the chilling backdrop of Hitler's rise and the specter of another war, Edna Ferber decides to follow an old dream: to act on the stage. Selecting The Royal Family, the comedy she wrote with George S. Kaufman, for her starring role, she travels to Maplewood, New Jersey. But her escape from the troubling daily headlines is short lived. Before opening night, a mysterious understudy is shot to death, opening up a world of lies, greed, and hypocrisy.

Ferber, along with Kaufman, who is directing the production, begin a different kind of collaboration: the discovery of the murderer. As rehearsals evolve, they deal with a cast of characters who are all hiding something from their days spent in Hollywood: a stage manager, a young ingénue, an American Nazi and his boisterous girlfriend, a stagehand named Dakota who is the son of a famous evangelist, his charismatic preacher-mother, her money-bags husband, and a driven acolyte of the church. Each character, Edna discovers, has some connection with the dead man. Why have they all converged on quiet Maplewood? As Edna investigates, she realizes that the answer to the murder lies back in Hollywood.

As Kaufman wisecracks his way through the story, Edna methodically examines the facts, determined to find the answer. Opening night looms and so does World War II. Edna, resolute, believes that justice needs to prevail in a world that is falling apart.

Trade Reviews
"Ifkovic's fifth Edna Ferber mystery provides a splendid view of the highbrow theater culture of another era." — Publishers Weekly
"The story unfolds Agatha Christie-style, with an assortment of likely suspects, but it's best if one thinks of the novel as a Christie story written by, say, someone of Ferber's, or indeed Kaufman's, witty sensibilities. This is the fifth Ferber mystery, and she continues to be one of the more interesting of the historical figures who have found new life as fictional sleuths." — Booklist
Customer Reviews
Write Your Own Review