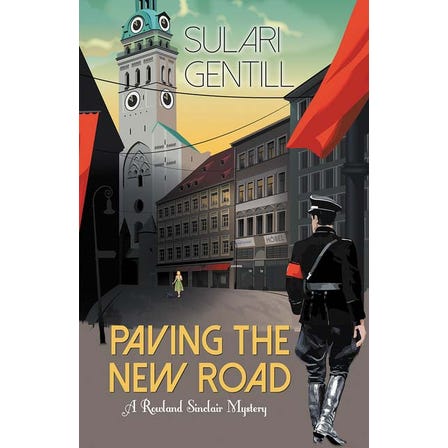 A fascinating historical mystery by Sulari Gentill, author of #1 LibraryReads pick The Woman in the Library

"The combination of famous historical figures, detailed descriptions of a troubling time, and plenty of action makes for a tale as rousing as it is relevant." —Kirkus Reviews

It's 1933. No less than Europe, Britain, or America, Australia contends with the Left, mostly Communists but also Socialists, and a rising Right, Fascists. Rowland Sinclair, bohemian younger son of the wealthy, influential, conservative clan headed by his powerful brother, Wilfred, has tangled with New South Wales' Right before. It did not go well.

New Guard leader Eric Campbell, the man who would be Australia's Führer, is currently in Britain "consorting with Sir Oswald Mosley," the leading British Fascist, making connections over cocktails in aid of bringing European Fascism to Australia. Campbell will soon be moving on to Germany to meet members of the Reichstag and, he hopes, Hitler.

The Australian way of life is not undefended. Old enemies have united to undermine Campbell's ambitions. Senator Charles Hardy, now a leading member of this unofficial Old Guard, brings Rowly a proposal. Their man in Munich, who was to keep an eye on Campbell, has been killed. Rowly's mission is to investigate Bothwell's death and, while at it, do his best to derail Campbell.

Rowly reluctantly agrees; it helps that his unconventional housemates, the poet (Jewish), the painter (Communist), and the sculptress (unpredictable), insist on coming along to watch his back. It's not your expected spy ring...

In Munich the friends pursue their joint missions while growing increasingly horrified at the goose-stepping euphoria, cruel acts, and book burnings of the rising Nazi movement. Yet they meet decent Germans like the tailor Alois Richter who's pursuing contracts for Nazi uniforms against rival Hugo Boss, and brave Albert Göring, Hermann's younger brother. And two besotted women: Unity Mitford, who stakes out the Osteria Bavaria every day at eleven a.m. intent on meeting her idol Hitler; and a photographer called Eva Braun, a rather ordinary young woman who's besotted with a man she calls Mr. Wolf.

This next Rowland Sinclair WWII Mystery is cleverly plotted, utterly convincing historical novel in which an amateur sleuth thrust into a world of spies, murderers, and despotic madmen where he can trust no one but his three mates. Sure to appeal to fans of Rhys Bowen, Kerry Greenwood, and Jacqueline Winspear, this gripping murder mystery is simply impossible to put down.

Trade Reviews
"The combination of famous historical figures, detailed descriptions of a troubling time, and plenty of action makes for a tale as rousing as it is relevant." — Kirkus Reviews
"This installment takes the aristocratic Sinclair into a much darker place than did the previous three entries in the series but does so without losing the stylish prose and the easy way with character that have given the novels their appeal." — Booklist
"... stylish, well-paced murder mystery... cheeky plotline... this tale is told with such flair and feeling for those extraordinary times... Verdict: thrilling." — The Herald Sun
Customer Reviews
Write Your Own Review