By David P. Wagner
As low as $15.99
Be the first to review this product 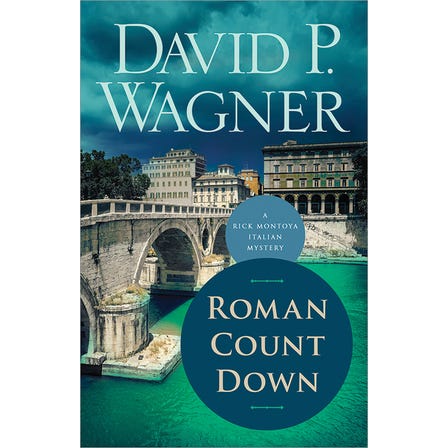 A prequel to the beloved Rick Montoya Italian mystery series, Roman Count Down brings the streets of Rome to life as translator Rick Montoya comes to grips with life as a resident of The Eternal City and investigates a brutal murder in an Italian adventure unlike any other

Rick Montoya, eager to experience more of his Italian mother's culture, heads to Rome to start his own translation business. He's armed with curiosity and an appetite for local food and wine.

Rick's maternal uncle is a Roman cop with one eye to his nephew's welfare and another to how Rick might be useful, perhaps widen his career choices. So Commissario Piero Fontana pulls Rick into an investigation: the murder of Count Umberto Zimbardi.

The wealthy count enjoyed indulging a circle of convivial friends and a hobby collecting oral histories by interviewing residents in the city's centro storico. After heading home from such an afternoon, he was found dead on a bridge over the Tiber.

As a newcomer and an investigator, Rick makes rookie mistakes. He's learning the ropes as an amateur sleuth and that living in Rome is different from visiting. Plus he's distracted by a woman pressing him into service as an Italy tour guide and the arrival of a college friend on a mission to sell Argentine wine to the Vatican. But there's a dangerous countdown at play, and Rick needs to solve the case before the unthinkable happens.

Perfect for readers of Donna Leon and Martin Walker, Roman Count Down embodies David Wagner's "...usual deft mix of travel and suspense" (Kirkus Reviews). Like all the Rick Montoya mysteries, this suspenseful prequel is rich in food, drink, and local culture that will leave you feeling as if you've just taken a tour of Italy.

David P. Wagner is a retired foreign service officer who spent nine years in Italy, learning to love things Italian. Other diplomatic assignments included Brazil, Ecuador, and Uruguay, as well as two hardship postings to Washington, D.C. He and his wife, Mary, live in Pueblo, Colorado.
Reviews
Write Your Own Review
VIEW
SBCNFG1638
All content and design copyright © Sourcebooks, LLC 2021. All Rights Reserved.