A Whale of a Time

By Bindi Irwin and Chris Kunz
$4.99
Be the first to review this product 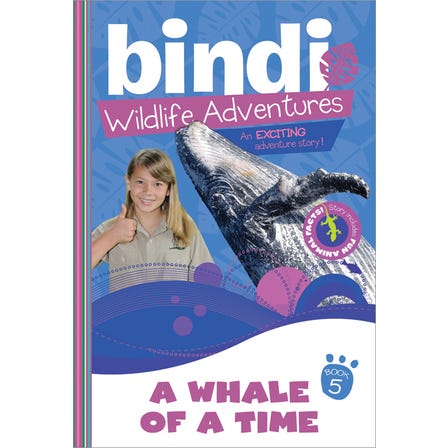 A fast-paced adventure series featuring the Jungle Girl herself! The stories are inspired and co-created by Bindi Irwin, daughter of the iconic wildlife expert Steve Irwin. The series features the characters of Bindi, her brother Robert, mother Terri, and the Australia Zoo.

Bindi takes a pair of troublesome twins on a thrilling whale-watching trip. It’s going great until one of the twins spots a bright flare in the sky. They race to the scene and find a crashed boat!

Can Bindi help stop the boat from spilling oil and save the nearby sea creatures from danger?
Product Details

17-year-old Bindi Irwin is an international award-winning wildlife conservationist and celebrity who has inherited her father's passion for wildlife and wild places. Born to Wildlife Warriors Steve and Terri Irwin, Bindi was quite literally born on television!

In 2007, Bindi launched her clothing range, Bindi Wear International, in Las Vegas, and that same year she was awarded two Nickelodeon Kids Choice Awards, Fave Aussie and Biggest Greenie. Also in 2005, Bindi launched her very own TV show, Bindi the Jungle Girl. Bindi won an Emmy in 2008 and was nominated for an Emmy again in 2009.

Bindi has co-created a range of books called Bindi Wildlife Adventures which have been launched in Australia, New Zealand in 2010 and the US in 2011.
Released early 2010, Bindi played the lead-role in her first full-length feature film, Free Willy: Escape from Pirate's Cove and starred in her first cinema release film Return to Nim's Island in 2013!

Bindi has dedicated her life to wildlife conservation and inspiring the next generation to make a difference in the world. She is a strong believer in kid empowerment and looks forward to spreading this message through her international filming work.