Do Animals Have Feelings, Too?

By David L. Rice
Illustrated by Trudy Calvert
$11.95
Be the first to review this product 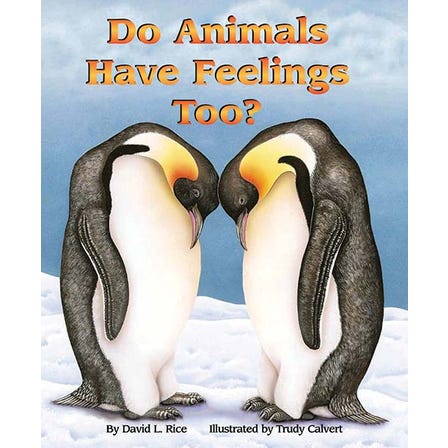 Explore real-life examples of animals portraying various emotions in this heartwarming and thought-provoking collection for kids and adults! Beautiful, life like art accompanies pages describing each emotion, and includes questions to the reader that are perfect for social emotional learning and an introduction to animal communication.

Did you know that emperor penguins have a unique song they sing as mates, and they can use it find each other in a herd of thousands a year later? That Pandas and brown bears frequently roll down hills, apparently just for the fun of it? Explore fascinating examples featuring animals from across the animal kingdom: gorillas, elephants, bald eagles, hummingbirds, sea lions, and more!

Readers will be prompted by questions as they explore each emotion:

When David Rice was seven years old, he observed a small dog trying to wake its mother which had been killed by a passing car. As he watched the grieving puppy's vain attempts, he was struck by the depth of sadness and pain. David's lifelong interest in feelings—both animal and human—comes through in his books, Do Animals Have Feelings Too?, Lifetimes and Because Brian Hugged His Mother. Lifetimes introduces some of nature's longest, shortest and most unusual lifetimes and the lessons we can learn from them. Because Brian Hugged His Mother shows how a chain reaction of kindness can spread through a whole school and community as a result of a single hug. David Rice is retired elementary and special education teacher, currently residing in southern California.

Trudy Calvert grew up in a rural, wooded area, near a creek where some of her first friends were tadpoles, minnows, ducks, squirrels and snakes. She raised a baby robin, and later a coyote pup that had been hit by a car. As an art teacher, and now as a full time professional artist, Trudy has a passionate love of nature and animals. She is past president of the Indiana Wildlife Artists, a group that promotes wildlife art. Often she can sense what animals are feeling and responds without needing spoken words. Do Animals Have Feelings To? is Trudy's first book with Dawn Publications.
Reviews
Write Your Own Review
VIEW
9781584690047
All content and design copyright © Sourcebooks, LLC 2021. All Rights Reserved.