By Anthony D. Fredericks
Illustrated by Jennifer DiRubbio
$8.95
Be the first to review this product 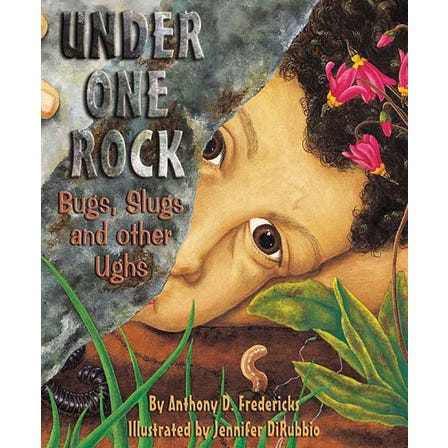 In Under One Rock: Bugs, Slugs, and Other Ughs, vibrant illustrations and rhyming text offer readers an experience exploring under a rock and a chance to learn of its ecology. Children will gain an appreciation for the world under a rock—that hides a whole crowd on a summer's day.

A whole community of insects and other creatures lives under rocks-worms and ants, spiders and slugs, crickets and beetles. Dr. Fredericks focuses on the whole "community" of neighbors where the ground beneath a big old rock is home to them all.

Backmatter includes:
Field notes with further information on the animals in this book.

A perfect book for:

Anthony D. Fredericks is a veteran nature explorer. He grew up on the beaches of southern California and during summers camped (and swatted mosquitoes) in the Sierra Nevada mountains of eastern California. Later he attended high school and college in Arizona where he often spent his free time trekking through the Sonoran desert. Now Tony explores the hillside in south-central Pennsylvania where he and his wife reside and frequently hikes the mountains of western Colorado where his granddaughter lives. A former classroom teacher and reading specialist, he is Professor of Education at York College. As the author of more than 30 children's books (some about "buggy" things) he is a frequent visitor to schools around the country, where he shares the wonders of nature with a new generation of naturalists.
Jennifer DiRubbio is both a passionate artist and an avid environmentalist. She has been active as an artist for several organizations that promote nature and a healthy planet. Jennifer graduated with a BFA from Pratt Institute in 1992. She keeps her home and studio in Merrick, New York, as "green" and environmentally sound as possible, where her husband and two young children also work and play.
Reviews
Write Your Own Review
VIEW
9781584690276
All content and design copyright © Sourcebooks, LLC 2021. All Rights Reserved.