For Baby (For Bobbie)

By John Denver
Illustrated by Janeen Mason
$8.95
Be the first to review this product 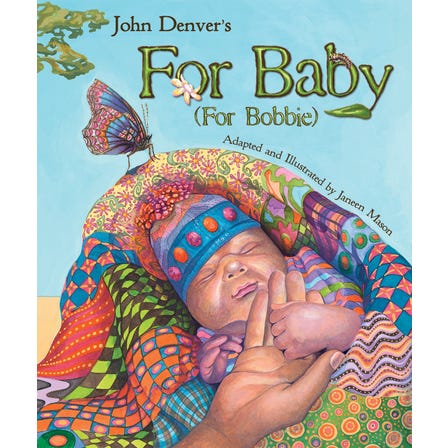 The perfect gift for someone you love, this culturally diverse picture book adaptation of the love song from John Denver features sunny, colorful illustrations of animals and humans from around the world.

Teach how both humans and animals express unconditional love and say your own "I love you" in this heartfelt, John Denver book for kids. Soft, watercolor illustrations by Janeen Mason depict families and animals from various cultures and accompany the timeless lyrics from one of John Denver's most heartfelt songs. Featuring elephants from Sri Lanka, puffins rom Iceland, baboons from East Africa, pandas from China, and more.

One of the world's best-known and best-loved performers, John Denver earned international acclaim as a songwriter, performer, actor, environmentalist and humanitarian. Denver's career spanned four decades and his music has outlasted countless musical trends and garnered numerous awards and honors. John Denver's love for nature, his hope and belief in the future, and his brilliance of expression inspired so many people toward "higher ground." Although he died in 1997, we are pleased to bring his timeless lyrics to the next generation.
Janeen Mason works as a fine artist as well as an author and illustrator of children’s books. Her original paintings are collected by Burt Reynolds, Reba McEntire, S. Kent Rockwell, and Evan Lloyd. She licenses her fine art worldwide, some of which have won international awards. In 2000 she received the National Award for Excellence in Communities for an interactive exhibit featuring the work of thirteen award winning children’s book illustrators.

In 2001 her book was selected by school children nationwide to rest in the top 100 out of 10,000 entries through a program known as the Children’s Choice awards. She serves as a Member of the Florida Arts Council, Chair of the Public Art Advisory Board, Illustrator Coordinator for Florida’s Chapter of the Society of Children’s Book Writers and Illustrators, Children’s Book Council, Picture Book Artists Association, and past member of the board of directors of the Arts Council of Stuart and Martin County.

Ms. Mason is popular at schools and conferences and an engaging guest on Public Radio and Television programs.When the children’s Book council selected her latest book, Ocean Commotion: Sea Turtles for review on Martha Stewart Living Radio, this is what they had to say:

"Aquatic fun and adventure as seen through the eyes of a loggerhead sea turtle. This vibrantly colorful book for young readers begins with a turtle hatchling on a Florida beach and then follows her odyssey out to sea. Perseverance is the hallmark of this sea turtle, as she conquers every ocean dilemma with quick thinking and hard work. Janeen Mason introduces young readers to the endangered loggerhead sea turtle and offers a glossary, enforcing new vocabulary relevant to the aquatic environment."

Ms. Mason was awarded a United States Maritime Literature Award for her book, Ocean Commotion: Sea Turtles. "The Florida Arts Council consists of many talented and remarkable arts advocates and individual artists," said Secretary of State Kurt S. Browning. "We are extremely proud of Janeen’s recent accomplishment in receiving this award, not only as a member of the Florida’s Arts Council, but as one of Florida’s many talented individual artists."
Reviews
Write Your Own Review
VIEW
9781584691211
All content and design copyright © Sourcebooks, LLC 2021. All Rights Reserved.