One fragile world. An epic fight for survival. 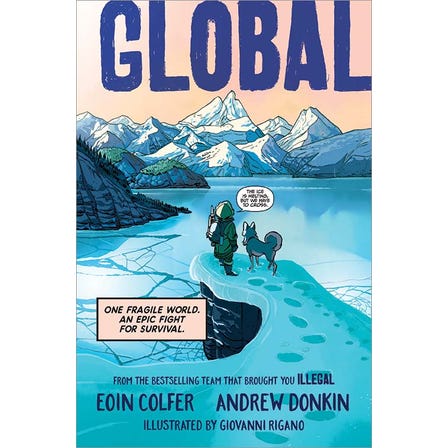 From New York Times bestselling author Eoin Colfer and the team behind the Artemis Fowl graphic novels and bestselling, acclaimed graphic novel Illegal comes a compelling and timely story that follows two courageous children as they face the effects of climate change.

Time is running out for Sami and Suki.

Sami and his grandfather live in a village along the Indian Ocean. They earn their living by fishing. But the ocean is rising and each day they bring back fewer and fewer fish.

Yuki lives in the far north of Canada where warming temperature are melting the ice. Polar bears have less food to hunt and are wandering into town looking for something to eat. Suki is determined to do something to help the bears.

"Moving and informative, Illegal puts an unforgettable human face to the issue of immigration; it is recommended for all readers of middle school level or higher." - ForeWord, STARRED review

"Action-filled and engaging but considerate of both topic and audience, Ebo's story effectively paints a picture of a child refugee's struggle in a world crisscrossed by hostile borders." - Kirkus Reviews, STARRED review

"Rigano's gorgeously saturated panels—rich in details, affecting in its captured expressions, landscapes made spectacular as if a reminder of everyday beauty despite tragedy—proves to be an enhancing visual gift to the already stirring story." - Booklist, STARRED Review

"Raw, realistic, and emotional, this graphic novel puts a harrowing spin on immigration and the risks people take to seek opportunities in other countries.... This graphic novel...makes truths about humanity abundantly clear with the frightening situations and tragic outcomes conveyed through the narrative, emotive illustrations, and the true story in the last five pages." - VOYA Magazine