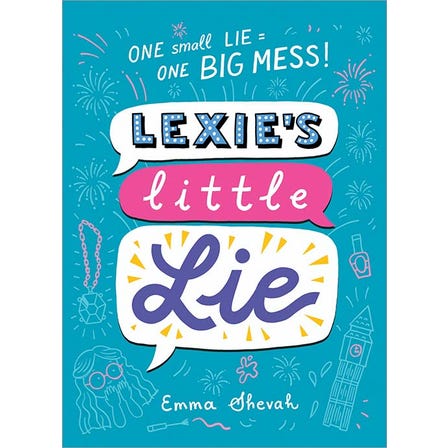 "…the story is full of heart and will resonate with Raina Telgemeier fans."—School Library Journal

New from the highly acclaimed author of Dream On, Amber and Dara Palmer's Major Drama—who knew one little lie could cause so much trouble?

Lexie and her cousin Eleni are super-crazy-mega-extra-seriously close. They're like twins who aren't actually twins, if that's possible. But when Lexie tells a terrible, jealous lie, her whole family is split apart.

It's up to Lexie to bring them all back together and fix her relationship with Eleni. After a few calamitous escapades, Lexie has discovered that there are all sorts of truths and all sorts of lies too…But can telling the truth be more hurtful than telling a lie?

Praise for Emma Shevah:
"[This] novel is a charmer...While its humor and illustrations lend it Wimpy Kid appeal, its emotional depth makes it stand out from the pack. Molto bene!"—Booklist, STARRED Review on Dream on, Amber

Great for anyone looking for books for kids:
• with a story about lying and the choices we must make.
• offering social emotional learning to target crucial skill sets.

Emma Shevah is half-Irish and half-Thai and was born and raised in London but now lives in Brighton, England. She runs the literary club at New York University in London and teaches English at Francis Holland School. Her novel Dream On, Amber received a 2017 Odyssey Honor Award for best audiobook produced for children and/or young adults. Visit Emma at emmashevah.com.
Reviews
Write Your Own Review
VIEW
9781492682943
All content and design copyright © Sourcebooks, LLC 2021. All Rights Reserved.