The Prairie that Nature Built

By Marybeth Lorbiecki
As low as $8.95
Be the first to review this product 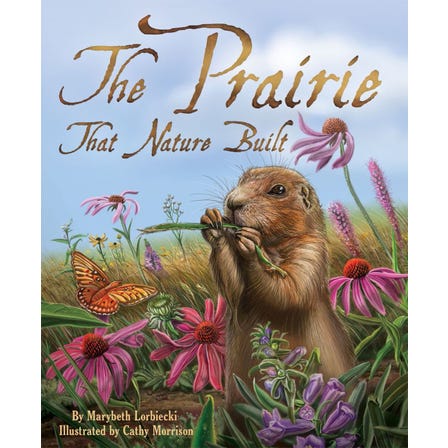 Learn about the plants and critters that depend upon one of the most endangered ecological systems in the world: the prairie! A beautiful picture book perfect for any young nature enthusiast, classroom, parent, or grandparent, The Prairie That Nature Built is written in cumulative verse and includes educational backmatter.

Sing-song repetition reinforces the richness of dynamic prairie life, and lifelike illustrations will be sure to inspire a love and awe of nature in any young reader!

These are the critters that worm and squirm
Alive in the dirt so dark and thick
Under the prairie that nature built.

This is the prairie that grows so free.
And this is the kid that loves it—me!

Marybeth Lorbiecki grew up in St. Cloud, Minnesota, near a prairie, before she knew it was called a prairie. Instead it was simply her favorite place for exploring and hiding amid the tall grasses. She would always be spotted by meadowlarks, who saluted her with song. That prairie was built over with homes, and she no longer found her friends the larks there any more. When Marybeth moved to Hudson, Wisconsin, she became part of a group that taught the community about the amazing prairie that nature built. She brought her daughters and son to wander through the prairie grasses. Together they helped preserve prairies nearby so the meadowlarks would have a place to nest and sing. She's written more than twenty-five books for kids, many of them about the places, plants, and animals she loves, including the prairie dog!
Reviews
Write Your Own Review
VIEW
SBCNFG4915
All content and design copyright © Sourcebooks, LLC 2021. All Rights Reserved.