Why We Love France but Not the French 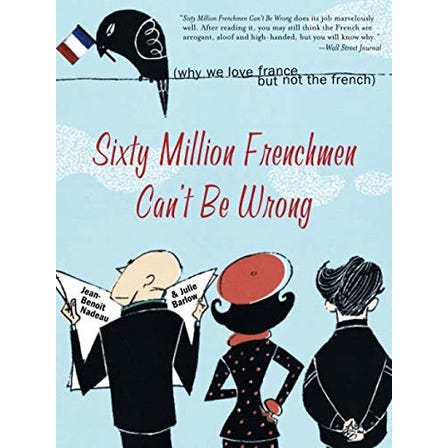 A journey into the French lifestyle—heart, mind, and soul.

The French drink, smoke and eat more fat than anyone in the world, yet they live longer and have fewer heart problems than Americans. They work 35-hour weeks and take seven weeks' paid vacation each year, yet they are the world's fourth-biggest economic power. So how do they do it?

From a distance, modern France looks like a riddle. It is both rigidly authoritarian, yet incredibly inventive; traditional (even archaic) yet modern; lacking clout on the international stage yet still hugely influential. Sixty Million Frenchmen Can't Be Wrong is so much more than a mere French history book or book about France for adults; it is a French culture book that reveals their ideas about land, food, privacy and language and weaves together the threads of French society, uncovering the essence of life in France and giving, for the first time, a complete picture of the French.

Keep it for yourself or buy one as a gift for a Francophile or France lover!

"[A] readable and insightful piece of work." —Montreal Mirror

"In an era of irrational reactions to all things French, here is an eminently rational answer to the question, 'Why are the French like that?'" —Library Journal