By Judith Gray and Sheila Ellison
$16.99
Be the first to review this product 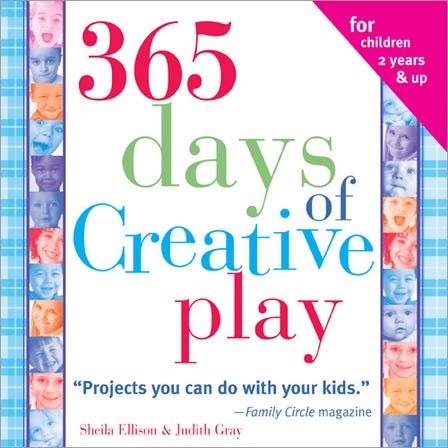 “Projects that you can do with your kids, and even better, activities they can do by themselves.”—Family Circle

“Now there is a solution to every day of the year.”—Parenting

This amazing resource of fun and thoughtful activities for kids ages two years and up will help encourage their creativity and learning through play. Using only safe, simple household supplies, 365 Days of Creative Play is great for parents, grandparents and childcare providers. Illustrated by children.

Sheila Ellison is the dedicated mother of four children and the stepmother of two. She is the creator and author of the 365 Series of parenting books, including 365 Games Babies Play, 365 Days of Creative Play, 365 Afterschool Activities, 365 Foods Kids Love to Eat, and 365 Ways to Raise Great Kids. She has appeared on Oprah, the Later Today Show, and the CBS Early Show. Her books have been featured in O Magazine, Parenting, Family Circle, Glamour, Complete Woman, Healthy Kids Magazine, New York Daily News, and San Francisco Chronicle, and have been selections of the Children's Book-of-the-Month Club. Sheila has appeared on hundreds of radio shows across the country. She continues to write and lives in Northern California.

Dr. Judith Gray is internationally known as an author, teacher, leader in dance research and speaker on future trends in education and dance. A former executive director of the Girl's Club of Tucson, Dr. Gray has been an educator at both the high school and university level. A mother of four, she is currently helping to develop a state-of-the-art high school in the Everett School District, Washington, and is on the Antioch University teaching faculty. Dr. Gray is also coauthor of 365 Food Kids Love to Eat and 365 Days of Creative Play.
Reviews
Write Your Own Review
VIEW
9781402205354
All content and design copyright © Sourcebooks, LLC 2021. All Rights Reserved.