The Exclusive System to Learn, Not Just Memorize, Essential Words

By Edward B Fiske, Jane Mallison and Margery Mandell
$18.99
Be the first to review this product 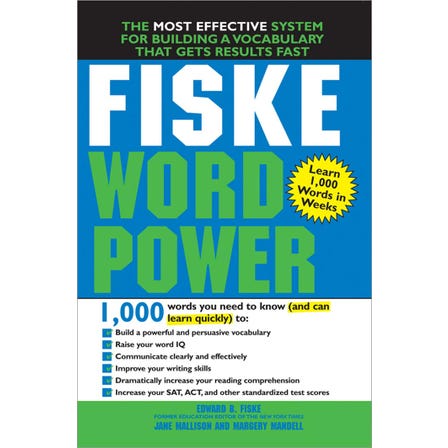 A powerful vocabulary opens a world of opportunity. Building your word power will help you write more effectively, communicate clearly, score higher on standardized tests like the SAT, ACT, or GRE, and be more confident and persuasive in everything you do.

But in order to truly increase your vocabulary, you need a system that works. With most guides, you end up only memorizing the new words for a short time, often not even long enough to use them in tests. Fiske WordPower is different.

Using the exclusive Fiske system, you will not just memorize words, but truly learn their meanings and how to use them correctly. This knowledge will stay with you longer and be easier to recall-and it doesn't take any longer than less-effective memorization.

How does it work? This book uses a simple three-part system:
1. Patterns: Words aren't arranged randomly or alphabetically, but in similar groups that make words easier to remember over time.
2. Deeper Meanings, More Examples: Full explanations-not just brief definitions-of what the words mean, plus multiple examples of the words in sentences.
3. Quick Quizzes: Frequent short quizzes help you test how much you've learned, while helping your brain internalize their meanings.

Fiske WordPower is the most effective system for building a vocabulary that gets you clear and successful results.

Edward B. Fiske is the founder and editor of the Fiske Guide to Colleges. A former Education Editor of the New York Times, Fiske is known around the world for his award-winning writing on topics ranging from trends in American higher education to school reform in Southeast Asia, New Zealand and South Africa.

The guide was established in 1982 when, covering higher education for the Times, Fiske sensed the need for a publication that would help students and parents navigate the increasingly complex college admissions scene. The guide, an annual publication, immediately became a standard part of college admissions literature and it is now the country's best-selling college guide.

Fiske has teamed up with his wife, Helen F. Ladd, a professor at Duke University, on several major international research projects regarding the development of education in various countries. Together, they are co-editors of the Handbook of Research in Education Finance and Policy, the official handbook of the American Education Finance Association. Fiske's journalistic travels have taken him to more than 60 countries on behalf of the U.S. Agency for International Development, UNESCO and the Asia Society.

A resident of Durham, North Carolina, Fiske serves on a number of boards of non-profit organizations working for access to college and international understanding. He is also a founding member of the board of the Central Park School for Children, a charter school in Durham.

Jane Mallison has taught for more than twenty years and has served on the College Board SAT Committee.

Margery Mandell has an MA in English from Columbia and is the coauthor of Million Dollar Words.
Reviews
Write Your Own Review
VIEW
9781402206535
All content and design copyright © Sourcebooks, LLC 2021. All Rights Reserved.