It's Always a Great Day to Be the Boss

By Charlos Gary
$14.99
Be the first to review this product 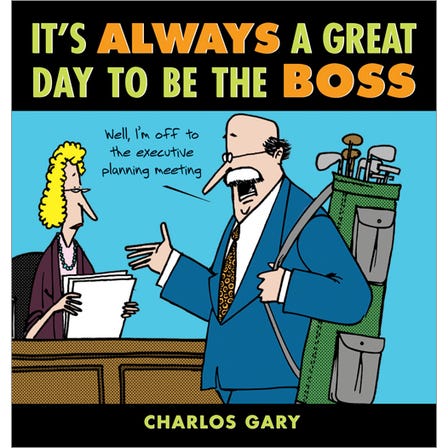 Yes, no matter what the weather or the quarterly forecast, it’s always the best of all worlds to be the boss…

A laugh a minute at the crazy world of the workplace, whether the boss is making you wash his car, locking you in your cubicle or booby trapping the office supplies cabinet.

Charlos Gary is a nationally syndicated cartoonist with Creators Syndicate whose current series, Working It Out, appears weekly in over 35 newspapers nationwide. Charlos Gary, syndicated cartoonist with Creators Syndicate, provides a laugh a minute and the perfect gift for coworkers, whether the boss is asking you to wash his car, locking you in your cubicle, booby trapping the office supplies cabinet or firing someone on the same day they’re closing on their new house.

Charlos Gary is a nationally syndicated cartoonist with Creators Syndicate. His first published cartoon was a comic strip entitled State U., which ran in the Ohio State University student newspaper. His first professional cartoon appeared in the Elmira, New York, Star-Gazette, thus launching his career as a cartoonist. In 1999, he earned a Pulitzer Prize nomination for his graphic artwork at the Arlington Heights, Illinois, Daily Herald. Today, his cartoon series, Working It Out, appears weekly in over thirty-five newspapers nationwide. Charlos lives in St. Petersburg, Florida, with his wife, Agustina.
Reviews
Write Your Own Review
VIEW
9781402208003
All content and design copyright © Sourcebooks, LLC 2021. All Rights Reserved.