The 100 Most Controversial, Debatable Questions for Die-Hard Chicago Fans

By John Mullin
$19.99
Be the first to review this product 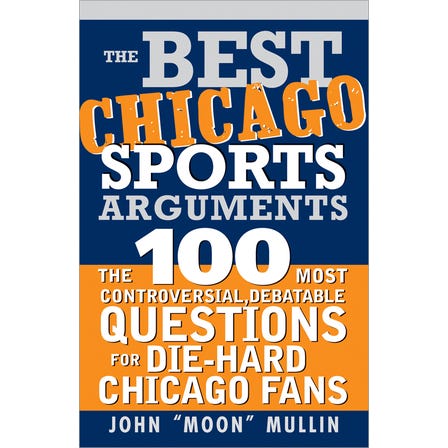 Every Chicago fan knows that the only thing better than watching sports is arguing about them-picking the best, the worst and who will come out on top. And no city tears its sports teams apart like we do in the Windy City!

Veteran Chicago sportswriter John "Moon" Mullin takes you inside the 100 best debates in Chicago sports. Covering the Bears, Cubs, Sox, Bulls, Blackhawks and beyond, every question you want to debate is here-as well as a few surprises.

Arguments include:
Who wins? Butkus vs. Payton. Sayers vs. Urlacher
Who is the best Chicago announcer? Jack, Harry...or?
NBA's best? Jordan's Bulls, Magic's Lakers or Bird's Celtics?
Who really killed the '85 Bears? Was it just McCaskey?
The Ultimate Bears Coach? Papa Bear or Da Coach?
Who does Chicago most love to hate? A Piston, a Packer or one of our own?

Chicago Tribune writer John "Moon" Mullin has covered the Bears since the closing days of the 1985 era. He has won writing awards from the Pro Football Writers of America and Associated Press Sports Editors, in addition to an Emmy award for his "Bears Insider" segment of the FOX-TV Bears pregame show. Mullin's writing has been nationally syndicated, and he is the author of The Rise And Self-Destruction Of The Greatest Football Team In History: The Chicago Bears And Super Bowl XX and Tales from the Chicago Bears Sidelines.
Reviews
Write Your Own Review
VIEW
9781402208218
All content and design copyright © Sourcebooks, LLC 2021. All Rights Reserved.