In the Land of Invisible Women

A Female Doctor’s Journey in the Saudi Kingdom 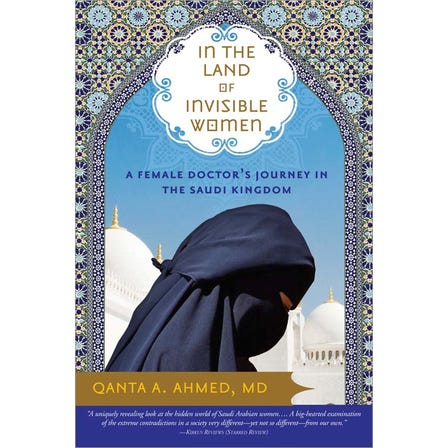 A strikingly honest look into Islamic culture?—in particular women and Islam?—and what it takes for one woman to recreate herself in the land of invisible women.

Unexpectedly denied a visa to remain in the United States, Qanta Ahmed, a young British Muslim doctor, becomes an outcast in motion. On a whim, she accepts an exciting position in Saudi Arabia. This is not just a new job; this is a chance at adventure in an exotic land she thinks she understands, a place she hopes she will belong.

What she discovers is vastly different. The Kingdom of Saudi Arabia is a world apart, a land of unparalleled contrast. She finds rejection and scorn in the places she believed would most embrace her, but also humor, honesty, loyalty and love.

And for Qanta, more than anything, it is a land of opportunity.

Very few Islamic books for women give a firsthand account of what it's like to live in a place where Muslim women continue to be oppressed and treated as inferior to men. But if you want to learn more about the Islamic culture in an unflinchingly real way, this book is for you.

"In this stunningly written book, a Western trained Muslim doctor brings alive what it means for a woman to live in the Saudi Kingdom. I've rarely experienced so vividly the shunning and shaming, racism and anti—Semitism, but the surprise is how Dr. Ahmed also finds tenderness at the tattered edges of extremism, and a life—changing pilgrimage back to her Muslim faith." — Gail Sheehy

"A female doctor provides a uniquely revealing look at the hidden world of Saudi Arabian women.

Denied a renewal of her visa in the United States, British-born, American-educated pulmonologist Ahmed accepted a position at a hospital in Riyadh. On rounds, the male residents she supervised would interrupt her, and female residents (what few there were) would cluster silently at the back of the group. All female doctors were required to be completely veiled. In surgeries, sons would supervise unconscious mothers, not to ensure the quality of their medical care, but to ensure that no parts of their faces were revealed by slipping veils. With such evidence around her, Ahmed began to think of these women as the wretched of the Earth. "I wouldn't be corrected in my simplistic views," she writes, "until much later, when I had befriended more Saudi women." When she did, she learned that the lives of these women under veils were no less complex and rich for being largely unseen. At her first party, she was astounded by the elegance and confidence exuded by professional women who had struggled immensely to achieve their positions. She began to understand how respect and love for women were expressed in her adopted society. Despite the strict monitoring of their clothing and behavior and the edicts against showing even the smallest scrap of skin in public, the Saudi women she met were neither so silent nor so helpless as their formless presence suggested. However, her friends were wealthy and educated; the vast impoverished majority could not even afford to visit doctors, let alone become one. Though never ceasing to be dismayed by the uglier aspects of regressive Saudi orthodoxy, Ahmed also found her own Muslim faith deepened and her conception of Islam broadened by her sojourn there. If she never learned to love the veil, she at least learned to understand it.

A big-hearted examination of the extreme contradictions in a society very different—yet not so different—from our own." — Kirkus Reviews

"Despite the restrictive customs of Saudi's religious rule, Ahmed found a vibrancy that left her hopeful. 'Saudi is much more heterogeneous than one would expect,' she says. 'Muslims themselves feel fairly lost in a country so caricatured and vilified for its severe austerity and Wahhabi theocracy, but it's also the cradle of Islam and the site of the Hajj—a symbol of what Islam could be.'" — Kirkus Reviews

in Riyadh, Saudi Arabia, where she celebrates her Muslim faith on an exciting Hajj pilgrimage to Mecca...

After 9/11, she is shocked at the widespread anti-Americanism. The details of consumerism, complete with Western brand names .... are central to this honest memoir about connections and conflicts, and

especially the clamorous clash of "modern and medieval, . . . Cadillac and camel." — Booklist

"Ahmed still beautifully asserts her arguments and confronts the anti-Semitism, the sexism, and the anti-western attitudes she experienced... In the Land of Invisible Women gave me a lot to think about, and just not about the complexities of Saudi Arabia but also my country's, the U.S.A., interactions within the Middle East. " — Adventures in Reading
"In the Land of Invisible Women is a must read for everyone. Why? People must find out how Dr. Ahmed dared to cope with radical Islamic fundamentalism. Rather than misery and despair, her story is one of brightness and optimism for Saudi women. But equally vital, it is a tale of expectation, a hope that brave Saudi men, who dare read her story, might have a jolt of conscience over unjustified cowardly feelings they hold toward women." — Blog Critics
"This book is a well -written and fascinating insider's look into life in Saudi Arabia and the challenges that women and sometimes even men must face in their daily lives." — Bookopolis
"Ahmed was saddened, distressed, and taken aback by her colleagues' excitement in reaction to the 9/11 attacks. Her friends talked about how America "deserved" this tragedy because of its support of Israel." — ForeWord
Customer Reviews
Write Your Own Review