By Dave DeWitt
$22.99
Be the first to review this product 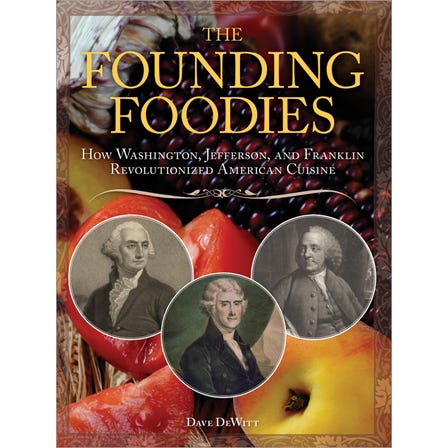 Who Were the Original Foodies?

Beyond their legacy as revolutionaries and politicians, the Founding Fathers of America were first and foremost a group of farmers. Passionate about the land and the bounty it produced, their love of food and the art of eating created what would ultimately become America’s diverse food culture.

Like many of today’s foodies, the Founding Fathers were ardent supporters of sustainable farming and ranching, exotic imported foods, brewing, distilling, and wine appreciation. Washington, Jefferson, and Franklin penned original recipes, encouraged local production of beer and wine, and shared their delight in food with friends and fellow politicians.

In The Founding Foodies, food writer Dave DeWitt entertainingly describes how some of America’s most famous colonial leaders not only established America’s political destiny, but also revolutionized the very foods we eat.

Dave DeWitt is a leading food expert. He has authored several books and has appeared everywhere from the Today show to Mythbusters. He has also been featured in the New Yorker, the New York Times, USA Today, and approximately 200 newspapers across the country.
Reviews
Write Your Own Review
VIEW
9781402217869
All content and design copyright © Sourcebooks, LLC 2021. All Rights Reserved.