Charles Sumner and the Coming of the Civil War

By David Donald
$22.99
Be the first to review this product 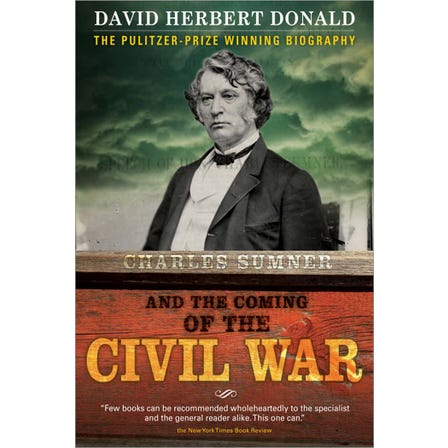 In this brilliant biography—a Pulitzer Prize—winning national bestseller—David Herbert Donald, Harvard professor emeritus, traces Sumner's life as the nation careens toward civil war. In a period when senators often exercised more influence than presidents, Senator Charles Sumner was one of the most powerful forces in the American government and remains one of the most controversial figures in American history. His uncompromising moral standards made him a lightning rod in an era fraught with conflict.

Sumner's fight to end slavery made him a hero in the North and stirred outrage in the South. In what has been called the first blow of the Civil War, he was physically attacked by a colleague on the Senate floor. Unwavering and arrogant, Sumner refused to abandon the moral high ground, even if doing so meant the onslaught of the nation's most destructive war. He used his office and influence to transform the United States during the most contentious and violent period in the nation's history.

Charles Sumner and the Coming of the Civil War presents a remarkably different view of our bloodiest war through an insightful reevaluation of the man who stood at its center.

"Few books can be recommended wholeheartedly to the specialist and the general reader alike. This one can."
New York Times Book Review

David Herbert Donald, who has twice been awarded the Pulitzer Prize for Biography, is Charles Warren Professor of American History and Professor of American Civilization Emeritus at Harvard University. His many books include Lincoln's Herndon, Lincoln Reconsidered, The Politics of Reconstruction, Charles Sumner and the Rights of Man, and Look Homeward: A Life of Thomas Wolfe.