Getting Money for College at Any Division

By Dion Wheeler
$19.99
Be the first to review this product 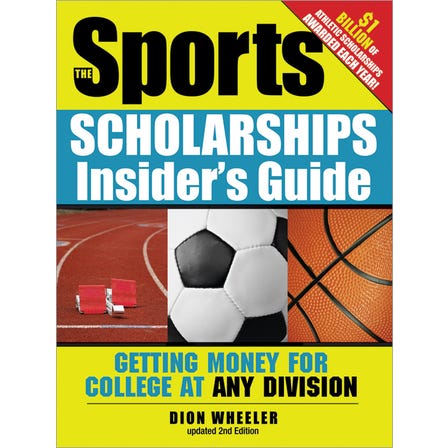 The #1 book on sports scholarships, completely updated and revised!

$1 billion of athletic scholarships are awarded each year

But student-athletes who aren't big-time recruits miss out on tens of thousands of dollars of financial aid available to them. The problem is students and parents don't know where the money is or how to get it.

The truth is: 80% of all college athletic opportunities are located outside Division I!

But to seize those opportunities, you must take control of your own recruiting process—recruiting, research and homework, exposure and promotion, and negotiating—all in the environment of a high-stakes contest where only the opposition knows the rules.

This book will give you the edge.

If you aren't one of the 4,000, but are athletically and academically qualified to participate in college sports, The Sports Scholarships Insider's Guide will lead you step by step through the twists, turns, and all too often unpleasant surprises to achieve your ultimate goal of a roster position and financial aid for your athletic ability.

Dion Wheeler, former coach and recruiting consultant, gives students and their parents the inside edge to not only find great scholarships, but get the best offer no matter what their skill level.

Without athletics, Dion Wheeler would never have graduated from UW-La Crosse. Growing up in an institution for dependent boys, he was an average student in high school. But a young coach inspired him to both exploit his athletic ability and to take his education seriously, as they were the foundation upon which he would "prepare for the future." And so he did.

Education and athletics have been the motivators of his time. Despite a few interruptions to experience the business world, he has taught and coached at every level: grade school, high school, and college. He has been a presenter and instructor at business, athletic, recruiting, and education seminars and has occasionally been accused of being a motivational speaker.

In addition to his recruiting experience - 14 years at the high-school level and 11 years at the college level - he managed the recruitment of his two (now grown) children, who were both successfully recruited. One by a Division I state university, the other by a Division II private college. One was an All-American, the other's career was cut short by injury.

His ownership of a college prospect recruiting service was the experience where the final piece of the recruiting puzzle fit. There he exposed, and often negotiated for, academically and athletically qualified prospects to coaches of nearly every sport around the country. His unique grasp of the recruiting process from every angle has prepared him to write this powerful guide.

Dion is retired and lives with his wife, Dianne, in Plainfield, Illinois.