The Bully at Work 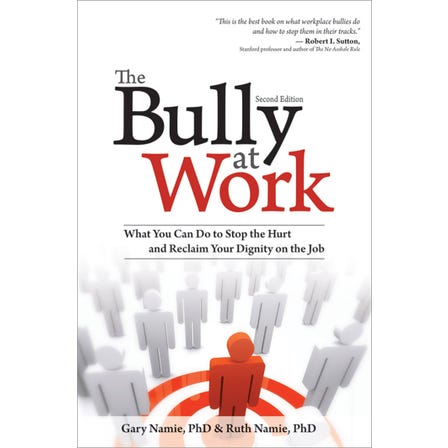 A landmark book that blazed light on one of the business world's dirtiest secrets, The Bully at Work exposed the destructive, silent epidemic of workplace bullying that devastates the lives, careers, and families of millions. In this completely updated new edition based on an updated survey of workplace issues, the authors explore new grounds of bullying in the 21st century workplace.

Gary and Ruth Namie, pioneers of the Campaign Against Workplace Bullying, teach the reader personal strategies to identify allies, build their confidence, deal with toxic behavior, and stand up to the tormentor — or decide when to walk away with their sanity and dignity intact.

The Namies' expertise on workplace bullying has been featured in such media outlets as The Early Show, CBS Radio, The Howard Stern Show, CNN, PBS, NPR, USA Today, and the Washington Post.

"This is the best book on what workplace bullies do and how to stop them in their tracks. The Namie's remarkably useful and concrete advice has helped millions of people, and The Bully at Work will spread their tried-and-true wisdom to millions more."—Robert I. Sutton, Stanford Professor and author of The No Asshole Rule

"Filled with remedies for an ailment that is ravaging workplaces..."—Harvey A. Hornstein, PhD

Gary Namie, PhD, (Bellingham, WA) is a social organizational psychologist. He is the president of the Campaign Against Workplace Bullying.


Ruth Namie, PhD, is the CEO of the Campaign Against Workplace Bullying. Dr. Namie has been a psychotherapist since 1986 and holds a doctorate in clinical psychology.
Reviews
Write Your Own Review
VIEW
9781402224263
All content and design copyright © Sourcebooks, LLC 2021. All Rights Reserved.