How a Tiny Greek Island Stole My Heart

By Jennifer Barclay
$18.99
Be the first to review this product 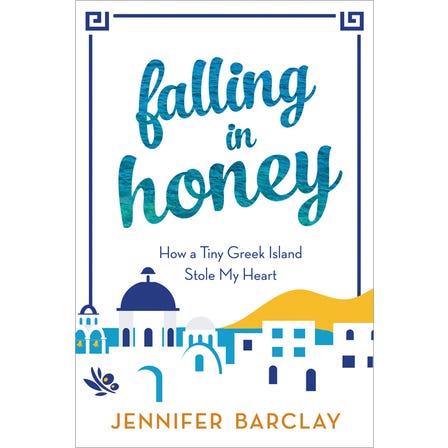 "This book will make you laugh and cry and laugh again. I didn't want it to end."—Emma Woolf, author of An Apple a Day

The Best Gifts in Life are the Gifts We Give Ourselves...

Eat Pray Love meets My Big Fat Greek Wedding with a sprinkling of Mamma Mia in this unforgettable journey from heartbreak to happiness. One winter, when her love life falls apart, Jennifer Barclay decides on Three Gifts to Self. One and Two are reducing her workload and staying away from relationships. The Third is a month alone on a tiny, wild Greek island. It’s a chance to find another kind of contentment, one that comes from holding an octopus in your hands. She decides to stay longer, but just when everything is falling into place again, the strangest thing happens…

"Barclay’s beautiful memoir recalls both Elizabeth Gilbert’s Eat, Pray, Love (2006) and the movie My Big Fat Greek Wedding, providing glimpses into the lives of people in a small Greek village and the process of healing from a broken heart."—Booklist

Jennifer Barclay grew up in a village in the north of England. After studying English at Oxford, she worked as an English teacher in Greece, a literary agent in Canada, a freelance editor in France and editorial director of a publishing company on her return to England. Her travels in many countries inspired her to write a first book, Meeting Mr Kim, as well as stories in newspapers, magazines and websites. In 2011, she moved to the tiny Greek island of Tilos, where she now works from home surrounded by mountains and sea, and wrote the book Falling in Honey.
Reviews
Write Your Own Review
VIEW
9781402285103
All content and design copyright © Sourcebooks, LLC 2021. All Rights Reserved.