The Alliance That Forged America

By Stephen F. Knott and Tony Williams
$19.99
Be the first to review this product 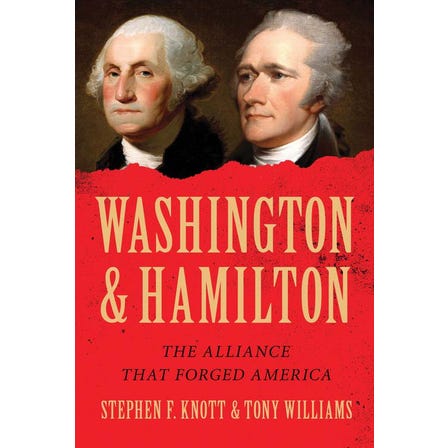 The Immersive Story of the Extraordinary Alliance That Forged Our Nation and the Unlikely Duo Behind It: George Washington & Alexander Hamilton

In the wake of the American Revolution, the Founding Fathers faced a daunting task: overcome their competing visions to build a new nation, the likes of which the world had never seen. As hostile debates raged over how to protect their new hard-won freedoms, two men formed an improbable partnership that would launch the fledgling United States: George Washington and Alexander Hamilton.

Washington and Hamilton chronicles the unlikely collaboration between these two conflicting characters at the heart of our national narrative: Washington, the indispensable general devoted to classical virtues, and Hamilton, an ambitious officer and lawyer eager for fame of the noblest kind.

Working together, they laid the groundwork for the institutions that govern the United States to this day and protected each other from bitter attacks from Jefferson and Madison, who considered their policies a betrayal of the republican ideals they had fought for.

Yet while Washington and Hamilton's different personalities often led to fruitful collaboration, their conflicting ideals also tested the boundaries of their relationship—and threatened the future of the new republic.

From the rumblings of the American Revolution through the fractious Constitutional Convention and America's turbulent first years, this captivating history reveals the stunning impact of this unlikely duo that set the United States on the path to becoming a superpower.

Tony Williams taught history and literature for ten years, and has a Master's in American History from Ohio State University. He is currently a full-time author who lives in Williamsburg, Virginia, with his wife and children. Dr. Stephen F. Knott is an Associate Professor of National Security Affairs at the United States Naval War College, and the author of several books.
Stephen F. Knott
Reviews
Write Your Own Review
VIEW
9781492631330
All content and design copyright © Sourcebooks, LLC 2021. All Rights Reserved.