Everything Is Horrible and Wonderful

A Tragicomic Memoir of Genius, Heroin, Love and Loss 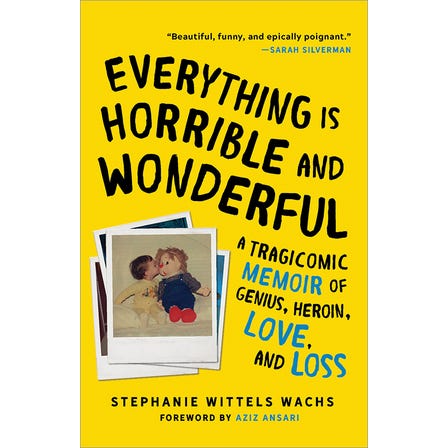 In the style of The Recovering, and Educated: A Memoir, Stephanie Wittels Wachs delves into the dark world of loss, grief, and addiction in a heartbreaking but hopeful memoir

With a captivating foreward by Aziz Ansari

One phone call was all it took to change Stephanie Wittels Wachs's life forever... Her younger brother, Harris, a comedy star known for his work on Parks and Recreation and for introducing the world to the art of the humblebrag, died of a heroin overdose. How do you make sense of such a tragic end to a life full of so much hilarious brilliance?

In beautiful, unsentimental, and surprisingly funny prose, Stephanie Wittels Wachs alternates between her brother's struggle with addiction, which she learned about three days before her wedding, and the first year after his death, in all its emotional devastation. This compelling portrait of a comedic genius and a profound exploration of the love between siblings is A Year of Magical Thinking for a new generation of readers.

Everything is Horrible and Wonderful will make you laugh, cry, and wonder if that possum on the fence is really your brother's spirit animal.

A touching memoir that delves into addiction, grief recovery, and healing after loss, this poignant story ultimately showcases the enduring love we have for those we lose too soon.